EDIT: Ana has been obeying so well today! After I asked her not to touch a book I had on the couch and she obeyed by not touching it, I went on and on about how good she was, how proud I was of her, and how she had obeyed. She pointed to Emma, and I told her that, yes, Emma had also obeyed well today. She pointed to Papa, and I told her that, yes, Papa had also obeyed well today. I then asked her, “Who does Papa obey?” to which she replied, “Mama!” Hahahahaha! Okay, so she only said my name because she wanted to know if I, too, obeyed today. But still. Hee, hee! (For the record, Wes says that he didn’t hear her. Suuuuuure, you didn’t.) END EDIT 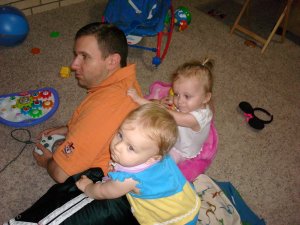 … doesn’t even distract us from what we were doing? Even getting kneed in the back, courtesy of Ana, didn’t seem to register with Wes. 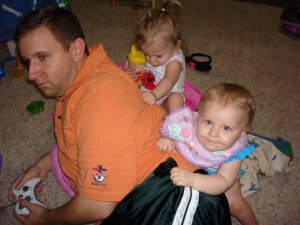 (Wes did turn around while this was going on and tickle them a few times… which made them want to claw him, grab at him, and crawl all over him even more.)

OH! Completely forgot this because the newness of this development is already starting to wear off on us, but Emma is starting to cruise! We haven’t been able to get her to do it along the couch yet, but if someone is lying on the floor, she’ll pull up on them and walk alongside them. Ana thinks this is so great and gives her so many kisses as she’s taking tiny little steps. Aww!