We had a fun weekend outdoors. On Friday morning, we attempted to take the girls to the county fair, hoping to see some animals and ride some rides. We apparently didn’t get the memo that there were no animals in attendance at that particular time of the morning and that the carnival didn’t start up until the evening. Hmm. Still, though, the girls looked adorable in their “fair fashion.”

We opted to go to the zoo in Oklahoma City on Saturday, where Ana wanted to get out of the stroller at each cage/habitat/exhibit to see the animals up close. 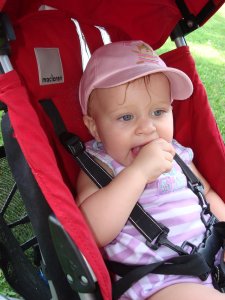 Fun times! I was impressed by the OKC zoo but a bit sad that it’s such a long drive away from Duncan. I don’t think I fully appreciated being able to walk to the zoo in Okinawa. I think the girls and I went every other day during our last few months there. I don’t even think we’ll become season pass holders here given the distance. Still, though, it makes for a fun day trip, and once it gets cooler outside, I’m sure we’ll go back.

Puppy Boot Camp continues. Reese almost has us trained. It was a hard road for her, I’m quite sure, since we enjoyed being able to sleep late on the weekends without waking up to yipping and yapping, being able to sit on the couch without following a puppy around the house, being able to keep our shoes on the floor without fear of them being eaten, etc. It couldn’t have been easy to break us of these habits, but I think she’s done it. In the process, she’s also getting better about doing her business outside and not attacking unsuspecting babies with overexuberant kisses. Yay for Reese!
One of the girls in my Sunday school class yesterday noticed that her KJV Bible sounded different than my Holman Bible. Thus began a little mini-lesson on the concept of translations and the original manuscripts of the Bible. If you ever want to totally blow the minds of a group of fifth graders, tell them that Jesus didn’t speak or read English. I’m sure He could have, of course, since He’s God and all, but seeing as how the English language didn’t even come into existence until much, much later in history and in a totally different area of the world… well, who would He have talked to? Exactly. Anyway, the look of shock on their faces at this new piece of information was priceless and reminded me of a discussion I had with my teenagers in Namibia once about how Jesus was Jewish. As they gasped and tried to wrap their minds around this, one of them said to me, “Well, then, shouldn’t WE be Jewish, too?!” That’s a good indication of a Christian culture, just like ours here in Oklahoma. People know that Jesus is right, that we should follow Jesus… but who in the world knows anything about what He taught or who He is? I’m challenged to remember that though we have a lot of answers and knowledge about being “Christian,” there’s a difference between being culturally Christian and being genuinely redeemed. I’m challenged to learn how to make true disciples and not just keep on perpetuating the cultural, fraudulent copies.
And with that, I think I hear the girls waking up. They slept late today, no doubt exhausted from our full weekend of fun…