Wes, Ana, Emma, and I took a “daycation” today. Since a long, far away vacation with toddlers ranks right up there at the top of my most nightmarish scenarios, this year we’ve opted to do day trips in the immediate area. We enjoyed the zoo about a month ago, and today, we went up to Lawton to enjoy a little place called Meers and the wildlife refuge just south of it.

Meers was in the middle of nowhere, quite literally, yet there were cars and customers everywhere, parked alongside the streets. The food was great, and the atmosphere was worth the trip. Even Ana left the restaurant with a smile on her face! (It was that fabulous grilled cheese sandwich and homemade ice cream that she had just enjoyed.)

And here is a picture of some of the lovely longhorn cattle… whose friends and family members “made” our burgers. Yum!

Wes thought we should drive up one of the hills/mountains in the area to better scope out the buffalo. We were distracted along the way by the beautiful views and had to get out of the car for pictures. Of the girls, of course.

(Yeah, we wouldn’t let them just sit there by themselves that high up. Especially since Ana was so interested in looking down and pointing to the distant lake with her entire body.) We got back in the car and made it to the top, where Emma immensely enjoyed the wind blowing through her curls.

And a trip to Lawton is never complete without a trip to Sam’s Club! (We needed diapers. And wipes. Which I’m sure you find very hard to believe.) Emma was thrilled by the low prices on bulk amounts of Gatorade. 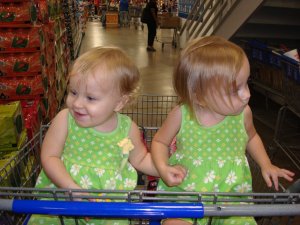 (Ana kept trying to hold Em’s hand, but Emma kept pulling away. Every time she would pull away frustrated, Ana would yell, “Ah-HA!” like it was a game and grab her again. We finally had to break them up. Oh, Ana, if only Emma would be your little doll like you want her to be!)
Anyway, what a fun daycation! I think the girls really enjoyed it, too.
Wes was an overachiever on Wednesday night after church and ran 3.1 miles in a little over thirty minutes. This threw the schedule TOTALLY off (well, by one week) and made me feel guilty for running a measely twenty-seven minutes. So while Wes watched the girls last night, I ran the complete thirty minutes, so as not to be outdone, and ran a total of… 2.8 miles. Not what I was hoping for, since three miles had been my goal at the beginning of the summer. Wes told me after my disappointing finish that my participation in this has been helpful to him. Every day when I ran a certain amount of time and a certain distance, he felt compelled to at least equal that, if not exceed it, so as not to be outdone by his wife. Realizing that we’ve encouraged one another in this way to much better health than we’ve had in the past few years sure does make two-tenths of a mile seem like a very trivial thing. And it is. So, yay for the completion of the C25K! (And yay for that day in the very near future, when I will reach three miles in under thirty minutes. )
We’re watching footage of the hurricane hitting Galveston. I remember last summer, when Okinawa was hit by what turned out to be a Category 4 (Wes says it was a 5) typhoon, how totally un-fun it was to be huddling together with Wes and Ana upstairs away from all of our windows as our steel-beamed house shook in the wind and the palm trees in our yard were totally uprooted and blown down the street. I was thirty-six weeks pregnant with Emma and remember praying that she wouldn’t come early because we had no idea what we’d do if I went into labor in that mess. If we had been able to evacuate by car, we would have been out of there in a heartbeat. So, why are there still people just sitting around in Galveston!?! I just can’t even fathom WHY you would choose to “wait out the storm” when you know the storm is going to hit your town and you can drive a couple of hours to safety. Maybe I’m saying this from the perspective of someone who “waited out” a much more powerful storm as an irrational pregnant woman, but you just can’t play around with that kind of weather. Come on, people!
And now, having given my hurricane/typhoon public service announcement, I think I’ll close this post.