Inauguration Day! To be honest with you, I’ve stopped watching the coverage. I will likely watch President Obama’s speech tonight, but I can’t stomach another Hollywood celebrity using this event as publicity. What a circus! I normally don’t have issue with celebrities using their fame to bring attention to charitable causes and needs that mainstream America probably wouldn’t find out about otherwise… but this is ridiculous. I mean, when Jack Black is heralded as someone whose political view is informed and inspired, I know that we’ve fallen into some strange and bizarre parallel universe or something. (Seriously — Nacho Libre, political genius! What is going on here!?!)

This month was an insurance month. Wes and I pay our car insurance in one lump sum for a six month time period, which saves us quite a bit of money over paying it out month by month. For those two months out of the year, though, we’re left wondering what in the world happened to his paycheck! Our goal is to save something from every paycheck, but in months like this, we just aim for breaking even. (At this point, it looks like we’ll still save something this month, though I have no idea how that happened.) Oh, for the days when we didn’t know how expensive life was. When someone else was paying for the electricity, the water, the gas, the telephone, the health insurance, the car insurance, the mortgage, the food, the retirement savings… and anything we made was just fun money. Looking back at our expenses this month, I can’t find anything that qualifies as “fun.” Well, besides our Netflix subscription. $9.76 of fun is all we’re allowed during an insurance month! Ha! I’m thankful to be married to someone who is like-minded in the area of finances. Makes it much easier to save and spend responsibly when we’re in agreement. (And, as a side confession, I did buy those Spurs tickets on this month’s check. Which is why I’m even more astounded that we’re still saving anything. Praise God!)

Ana had a bad tummyache yesterday. So bad, in fact, that she insisted on being held all morning long and wouldn’t stop crying. Em was walking around in a dirty diaper, and I couldn’t even get Ana to let go for a second so that I could take care of it. For only the second time in my tenure as a mommy, I called Wes and tearfully begged for help. (The only other time I did so was when Ana was four months old, having the worst day of her little life, and refusing to be consoled. I was a new mom, we had just moved to Japan, and I was struggling to figure out how to do anything. It’s a good memory now, because the very next day I found out that I was pregnant with Emmy. If I had gotten that news just a day earlier, I might have thrown myself off a cliff, but praise God for good timing!) Yesterday, however, Wes was in a meeting and didn’t get my hysterical call. I finally had to put Ana down, where she screamed and cried all while I changed Emma, dressed her, and started lunch for her. Ana spent Emma’s lunch hunched up on my shoulder, shaking and crying, refusing to eat. Wes called me back, and I told him that I thought I had it under control and could take care of Emma even while Ana was permanently attached to me. He came home a couple of hours later, RIGHT AFTER Ana did some business… so, he walked in to see her and Emma laughing together on the floor, having the best time ever. I’m sure that somewhere in the back of his mind he thinks I made the whole thing up, but it was bad. Bad, bad, bad. I’m just glad she’s better today!

I had a friend from college recently show me her bridal portraits. She’s a beautiful woman who picked a gorgeous dress. She looked just wonderful in her pictures… but it was a little unsettling to see what passes for “artistic” these days. The photographer actually had her crouching on the ground on all fours in a strapless dress, then leaning back on her elbows and lying down to (ahem) show off even more. And the expressions on her face — blushing bride traded in for ravenous tiger! I would never tell her any of this because they’re HER pictures, and she looked just beautiful on her big day. But I still wonder. What happened to sweet, dignified poses in your wedding dress? What happened to the idea of a modest, pure bride? She’s not the first friend to have bridal potraits like this, and I wonder when this trend became fashionable. My sister and I had different photographers do our bridal portraits (eight years ago for her, four years ago for me), each with their own idea of what qualified as artistic, and all of our pictures were classy and dignified. None of this pouty, “come and get me!” posing. Oh, well. Here’s my “sexiest” bridal portrait pose… 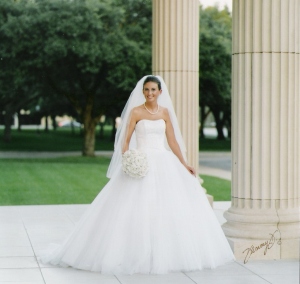 Oh, is that not sexy? Maybe because IT WASN’T SUPPOSED TO BE. It’s a bridal portrait, people. Not a cover for the latest men’s magazine. (And, yes, I realize that there are people far more prudish than myself who would chastise me for wearing a strapless dress… but I wasn’t crawling/rolling around in it!) Wow. Am I going to be like the most un-fun mom ever to teenage girls? Oh, how I don’t anticipate the conversations we’ll have on those days…

And now that I’ve just totally blabbed on and on about nothing, I should probably go. I’ve been working on a grocery list this morning, and now, I’m wondering why I even put a list together. It’s not like we don’t get the same things every time we go, you know? I love our routine. I’m glad we have one!

Oh my… the inauguration is going to be on Nick Jr. Ana is going to have a fit when President Obama interrupts Dora. Which is to be expected anyway, since she was on the McCain train. Have a great day, friends!