You ever notice how quiet it is when your children aren’t at home? I’ve spent the last ten minutes trying to figure out where an unidentified buzzing noise was coming from, only to discover that my computer makes that faint humming sound. This is my first time to notice it, as the computer is usually only on when Dora is blaring on the television, when Ana and Emma are chasing each other through the house, or when all of their talking toys are talking at the same time, sending BC into a series of howls and growls. It’s so quiet in here right now that my ears are hurting.

Yes, you read right — Ana and Emma are on a little vacation. Wes and I have a conference to go to next weekend, and when we asked his parents if they would mind having the girls for a few days while we attended it, they asked if they could have them for a whole week. This makes good sense, seeing as how they live so far away and need the extra days to make the two drives worth it, but… a whole week?! I’m not counting the minutes just yet, but I’m sure I’ll be crazy by the time we pick them up. Anyway, Nana and MawMaw (Wes’s grandmother) drove up Thursday, stayed in town for the night, and left early yesterday with Ana and Emma in the backseat. I’m thankful that the girls have two sets of grandparents who want to spend so much time with them and even more thankful that they don’t mind numerous phone calls each day so that I can check in. I talked to the girls this morning while they were on a wagon ride around the neighborhood, and they couldn’t stop telling me about Angus (Coach and Nana’s bulldog) going to (obedience) school. Thrilling stuff for toddlers, and stuff that Mommy loves hearing them talk about!

Nana dropped off a little something while she was in town. A little background on this “little” something. In Namibia, local artisans carve all kinds of trinkets out of wood to sell to tourists. When my parents came to visit me there, they bought a large carved chest for me and paid to have it shipped back to Texas. I made the arrangements and was so shocked by the expense involved in shipping such a large piece that I determined I would only be able to take back to the US what I was able to fit into my luggage. That meant that I couldn’t buy a tall wooden giraffe, which I had long since admired. Years later, I’ve often thought about those giraffes and told myself that if I ever make it back to Namibia, I’m going to get one and let it be my carry-on luggage. Because flight attendants would LOVE me for bringing a six foot giraffe on the plane, right?

Long story a little shorter, my mother-in-law heard about this and has actually been in touch with both the pastor and the missionaries I worked with on the field, trying to figure out how to get a wooden giraffe from Namibia for my birthday. Here is the fruit of her labor… 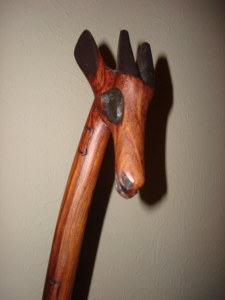 A wooden giraffe! From Namibia! You have to see its size to really appreciate it, though..

I know, it’s gigantic! I was so surprised and excited to see it, never expecting to get one unless I actually went to Namibia myself to pick one up. How awesome is my mother-in-law?! (And, no, it’s not my birthday yet, but she rightly ascertained that when we go down for Thanksgiving we won’t have room in the trunk of our car for this, so she brought it down in her SUV. I’m not even sure it would fit in a trunk!) Thanks, Nana!
And that’s about it from here. Hope your weekend is going well!