… a crooked Christmas tree! (This tree, for the record, is not crooked. Must have been the angle I was holding the camera because the door to the playroom ALSO looks crooked. Hmm.) 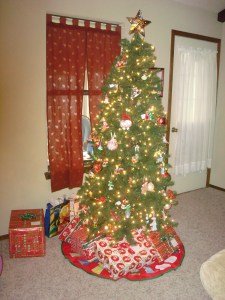 We put up the Christmas decorations this past weekend. If it’s crazy to start celebrating the birth of the Savior a couple of months early, then we are indeed crazy. And happy to be so. The girls were very excited about hanging ornaments on the tree, although they didn’t seem to understand me when I told them to hang them HIGHER than the lowest branches. We had a very bottom-heavy tree until I went back during naptime and evened it out a bit. 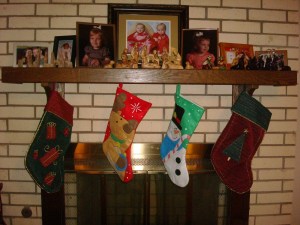 The nativity sets on the mantle stay out all year, but they have an even more special meaning this year as the girls brought out their toy nativity set and began telling the Christmas story to each other. In Ana’s words, “Then, they went to go see the Baby Jesus. Baby Jesus! Are you having a sunny day?!” Emma, meanwhile, kept dancing a cow around the manger, yelling, “Hi, Jesus! Hi, Jesus!” 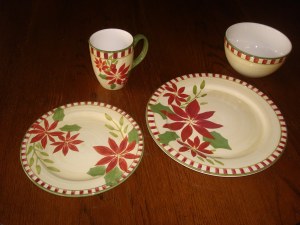 And YES, those are the dishes I couldn’t decide on. Wes found a deal that couldn’t be passed up and bought eight place settings for our fifth anniversary. That particular milestone isn’t until next month, but he told me to go ahead and open them up so that we could use them this holiday season. And I didn’t argue with him, obviously, because who ever refuses to open a gift early? You know? 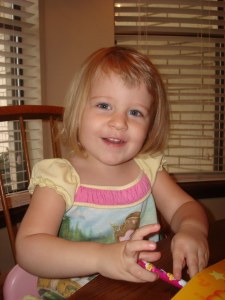 Here’s Emmy, fresh from her bed. She didn’t even give me a hello this morning but instead walked up to me and said, “Emmy need milk and pancakes.” I already had them ready, thankfully. I like a girl who knows what she needs and doesn’t leave you guessing. She seemed to perk up a bit after those first few bites. (She’s losing her baby roundness, as you can clearly see in this picture. Break my heart, skinny Emmy!) 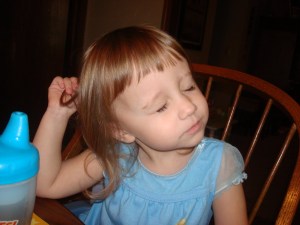 And here is Ana, testing the theory that if she can’t see me, I can’t see her. You see how well that’s working out for her.

Just wanted to post those pictures while I was taking a break from NaNoWriMo. I’m up to 20,550 words and am thinking that 50,000 might not be enough to write all that I was planning on writing. I should have known that once I started this, I wouldn’t be able to shut up. I am loving every minute, though, and wish so desperately that I hadn’t waited so long to try something like this.

Better get back to it. Hope you’re having a great day!

One thought on “It’s beginning to look a lot like…”