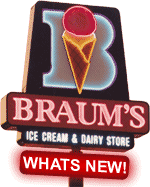 We took the girls out for ice cream after church the other night. Just because. We’ve been telling Emma for what seems like forever now that as soon as she goes “poo poo in the potty” (and with that, half of you have stopped reading) that we’ll take her out for ice cream, just like we did when Ana cleared that big hurdle for the first time. Ana reminds Emma of this every time she’s in the bathroom (no matter who is sitting on the potty), when we drive by Braum’s (no matter where we’re going), and whenever we mention “ice cream” (no matter who is within earshot). Ana won’t let Emma forget that one day, some day, she’s going to do the deed and get what’s due her.

Is it any wonder then that when we pulled into Braum’s the other night, Emma said, in a rather shocked voice, “I go poo poo?!” Like she had and totally hadn’t remembered doing so. Because surely — SURELY — that was the reason we were getting ice cream!

Oh, Emmy. If only all of life’s big triumphs came that easily. But you’ll get there, sweetbear!

Hope you’re treating yourself these days, just because! 🙂