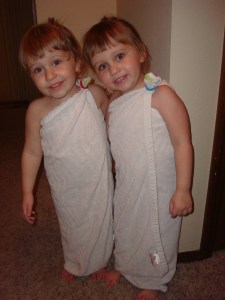 Random togas? How about super cute togas! Ana wanted to wear her towel after bathtime, and I figured this was as good a time as any to dress my girls up as little Greek goddesses. They were thrilled… until Ana’s toga fell off. And, then, it was just beyond scandalous, so we returned to our regularly scheduled footy pjs.

Anyway, it’s been a long time since I’ve written about anything besides tile (which is only so exciting), so I thought I would catch up. I said “catch up” to Ana the other day, and she assumed I meant “dipping sauce,” so here’s your random ketchup…
– We found the television remote. Guess where it was? Ding, ding, ding! That’s right! It was IN THE RECLINER. It fell into a back portion somehow, and the more we searched and tilted and pushed and prodded, the further it fell. Wes saw its shadow on the backside of the recliner and hung his head in shame since I told him it was IN THE RECLINER way back when we lost it and he didn’t believe me. (Actually, he was too excited about having two television remotes to even remember that I had foretold this conclusion long ago.)
– Ana’s Leapster, through circumstances we may never fully understand, died. The toy that was heralded as one that your preschooler couldn’t break… well, my preschooler broke it. (Truthfully, I think her toddler sister had something to do with it, as I caught her on more than one occasion beating the screen rather forcefully with the attached stylus. Hmm…) Ana bemoaned the “broken Leapster” night and day until we could get to the store and replace it. Emmy (or “she who broke the last one”) was rather put out by the fact that we were buying something for Ana and not her, so I bought a Snickers bar for her while we were checking out. This solved the problem and obliterated the Emmy angst. Oh, if only all of life’s calamities could be subdued with a Snickers bar!
– Speaking of replacements, Wes recently replaced my iPod. Up until then, I was the owner of the oldest iPod ever made. (Perhaps the unit itself wasn’t the oldest, but the model? I’m serious when I say that it was the first ever made.) While I appreciate the sleek style of the new one (and all the extra room!), I have to admit that I feel a little less secure running with it. If I was attacked while running with the old model, I could have easily knocked my assailant out with it, which was a big plus. Laugh if you will, but I have reason to think like this, as my neighbor’s huge dog has JUMPED THE SIX FOOT FENCE and come after me as I’ve run in the past. That’s one way to improve your time, let me tell you.
– On that same thought, we’re still running. And it’s still exhausting. I keep waiting for it to get easier, but every day is a beating. Perhaps this is why they call it exercise. Wes keeps increasing his distance and slimming down his time, but I’m still faithfully plodding along with my two-point-two miles a day, after which I’m gasping for breath and certain that my heart is going to explode. Maybe after another month of this I’ll be up to two-point-THREE miles. One can only hope!
– Our shower has been leaking for a long time. The addition of tile floors made it more obvious because the sound of the constant dripping was amplified as we tried to sleep. Wes tried to fix it, only to have some of the very old parts (original to the house!) fall apart in his hands. We called the plumber when we couldn’t do anymore, and he came and fixed everything in under thirty minutes. Stopped the leak, installed new hardware, even added new fixtures — all under thirty minutes! I would normally groan over the cost, but with all that he did, it was worth every penny. I could get used to this DIY household stuff being done by professionals, you know. Anyone know someone I can call to landscape our entire yard? (I kid. Can’t afford that. But wouldn’t it be nice if I could?)
Better get back to cleaning the house…