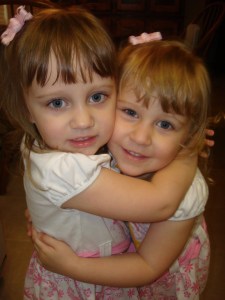 They’re back… and very, very chatty!

Ana, after I rescued her from a very high spot in an indoor playplace, “Mommy, you saved my life!” (She was pretty high up there.)

Emma, after the first few notes of Train’s “Hey Soul Sister” song, “Hey! Dat MY song!” (Ana does sing the chorus to her over and over and over again.)

Ana, telling us about the newest Shrek movie, “But first he had to find the other Shreks, and there were lots and lots of them. Maybe fifteen or one hundred thousand.” (That narrows it down a bit.)

Emma to Charlie, “You EARS stickin’ up, Charlie!” (Took her a while to notice this.)

Emma to me, in the bathroom, “Now you go away!” (Now that she’s potty trained, she doesn’t even want me in the bathroom with her. Which is fine by me!)

Ana to me, when I explained that Fantasyland at Walt Disney World is under renovation (until 2012!!!) to bring in new rides, “Hmmm…. maybe they’re bringin’ in Nick Jr. rides!” (Uh, probably not.)

One thought on “Chatty Girls”