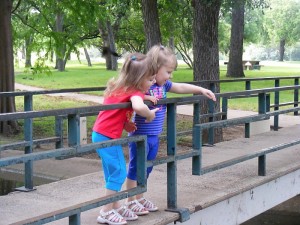 A few funnies from the Faulkettes…

Me to Emma, “What does Jesus do?” Em to me, “He be mean to people.” Ana, gasping, “NOOOOOO, EMMA!” (I’m pretty sure Em heard Ana say that the people who put Jesus on the cross were mean to Him and she repeated it, mixing up people in the process. Ana’s righteous correction cracked me up, though. 🙂

Ana, randomly, “Last year, Brother Monkey was a girl.” Then, “When I was a baby, I put sticky rice in my ears. That’s how I was born.” (Wow. I don’t even know what to say about these.)

Em to the woman who cut her hair at Pro-Cuts, “Please no use the blow dryer on me!” (Please, no, for the sake of all of our eardrums. Em is super scared of that blow dryer!)

Ana to me, “If you leave me, then I’ll be lost.” Me to Ana, “I’m never going to leave you! Why would you think that?” Ana to me, “Because I would be lost if you leave me.” Me to Ana, “What?!” (Note to self — a sleepy Ana is an illogical Ana. Neverending, circular conversations pre-naptime should be avoided at all costs!)

Emma in the backseat, as Ana was correcting her for taking the padding off her car seat’s armrests (yes) and putting them on her hands (yes), “NO, ANA!” (Made funny by the fact that as she said it, she was waving those armrest mittens right at her.)

Ana at youth camp, “I want to go where they play the loud music that hurts my ears.” (This is only funny because she said this right as we were walking by the lead singer of the worship team. Ten thousand people at camp that week that she could have shared this with, and it just happened to be the guy who makes the loud music!)

Emma, proudly marching out of the playroom, covered in red ink and holding up her hands to me, “Look what I did, Mommy!” (Yes, she found an ink pad and was caught, literally, red handed. At least she was honest about it!)

Ana to me, after a Bible story, “I wish I could hug Jesus.” Me to Ana, “Well, one day you’ll be able to when you’re with Him in Heaven.” Ana to me, “I wish I could be in heaben right now!” (And while I don’t want her to be in “heaben” anytime soon, I certainly appreciate her very RIGHT view of what it will be like — just Jesus.)

Emma, no matter what Charlie is doing, “He such a GOOD puppy.” (There is no end to the irony when she says this, and he’s chewing on something he shouldn’t be chewing. Hmm…)

Emma, when asked where she was born, “Tess-us… no, PAN!!!” (Well, the rest of us are from Tess-us, but she was born in Pan. And now we live in Oh-home-uh. No wonder the poor girl gets her places mixed up now and then!)

Hope you have a great weekend!