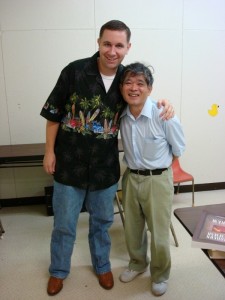 One day, early into Wes’s pastorate in Okinawa, an elderly Japanese gentleman came by the church. Rather than going next door to our Japanese language sister church, he came to Central Baptist, telling Wes that he had personally known the missionaries who founded the church years before. He introduced himself as Mr. Miyagi, and it became clear early on in his introduction that he was a very educated man. His learning was precisely what brought him to Central that day, as he explained to Wes his desire to know the Bible. Wes jumped in with both feet, and within weeks of studying Hebrew together, taking apart the text of Scripture, and discussing the big questions of eternity, some things became clear.

Mr. Miyagi was, like most Japanese, not a Christian. His beliefs included a little bit of Buddhism, a dash of Taoism, and a healthy amount of ancestor worship. As he and Wes studied together, he began to form a perception of Jesus and added this to his cabinet of deities. They all had their strong points — these beliefs of his — and by believing fervently in everything, he honestly thought that he had it covered.

Before long, the text of Scripture led to some uncomfortable conclusions for Mr. Miyagi. The God of the Bible left no room for any other gods in the cabinet. Could it be that all religions were NOT created equal? Could it be that there was, just as Jesus claimed it, only ONE truth? And could it be that rejecting this truth, by reason of rebellion, stubbornness, or simple ignorance, would result in eternal damnation?

As Mr. Platt discusses in this chapter of Radical, we as a culture have the same questions. And we, as a culture, have just as much trouble processing the truth of the exclusivity of Christ as Mr. Miyagi did. I think the biggest part of this is that we feel, in our heart of hearts, that we don’t start out condemned at all. Surely we start out better than already doomed, right?!

I took Business Calculus in college. And I had no business taking calculus, y’all. Holding onto the glimmer of hope that my high school calculus class would have been enough preparation for what was to come, I listened as the professor told us something that wasn’t entirely true. “You’re all starting out, this first day, with an A. What you do from here on out determines whether you keep your A or lose it.”

It was a reassuring thought to me, but the more I thought about it, the more I realized that he had sold us a false bill of goods. I took it to heart and did just as much as I thought I could do to maintain that A (or a respectable C) and was a bit shocked when at the end of the semester, I was left with a D. What happened to my A?! The truth was, I hadn’t started with ANYTHING. And what little good I thought I did didn’t end up even close to that A that my professor assured us we all had. I would have done MUCH better had he started the class by saying, “You’re all failing. And you’re at my very mercy.” Because that? Was the truth! We all started with an F. Every single one of us!

I know the analogy falls apart because even my feeble attempts did earn me more than a failing grade (not much more, though!), and as we all know, there are no works that can earn us anything apart from the condemnation we find ourselves in before a holy God. As Mr. Platt explained in this chapter, there are NONE of us who are innocent, none of us who “start out with an A.” We all start out condemned and deserving nothing apart from torment and eternal punishment. Our culture doesn’t appreciate or buy into that assessment, but it’s the truth. And without that crucial truth, grace — given so freely, so undeservedly, and so abundantly — isn’t nearly as amazing as it is in light of who we are and what God does in spite of our pitiful condition.

I think this statement sums up the entire situation very well — “People are not ultimately condemned for not believing in Jesus. They are ultimately condemned for rejecting God.” We aren’t serving, we aren’t spending ourselves for the Gospel, we aren’t living redeemed lives because somehow, WE DON’T BELIEVE THIS. We either believe, like my calculus professor, that we all start out with an A before God, so that those who haven’t heard are still covered. Or we believe, like our friend Mr. Miyagi, that the fervor of our faith validates any belief we add to our cabinet of gods. But this is NOT what the Bible teaches. People who don’t have a true, redeeming faith in Christ are without hope.

This is difficult to read and know. And I don’t pretend to have all the answers to how we should live out this truth, how this urgency should change our day-to-day lives, or how really embracing this reality should motivate us. But I know, for our family personally, that we’re saying now, loud and clear, that we will go wherever He leads whenever He leads us there. Or, as is far more difficult for us, to STAY right where we are, right where He’s placed us. God knows how He will mobilize His people to reach the nations, and our job is to be open and obedient to His will. I love how Mr. Platt breaks it down by saying, “The will of God is for you and me to give our lives urgently and recklessly to making the gospel and the glory of God known among all peoples, particularly those who have never even heard of Jesus.”

I don’t know what that looks like for you, but that’s it! Living for Jesus, pure and simple. THERE IS NO PLAN B!

3 thoughts on “Miyagi-san and Calculus”