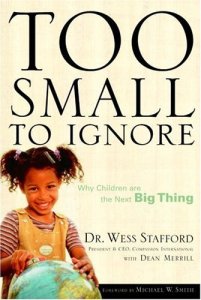 Too Small to Ignore is the life story of Dr. Wesley Stafford, president of Compassion. Dr. Stafford begins the book by telling stories from his early years in a small West African village where his parents served as missionaries. He details some of the problems of poverty he encountered as a boy, but more than that, he concentrates on what it meant to him to be valued as a child by his parents and by the village around him. Throughout the book, Dr. Stafford drives home the point that children matter, that our early years with our smallest ones are a critical time, and that great effort should be made to care, nurture, and provide for children all over the world. The story continues on to a boarding school for missionary children and the horrific abuses that took place there while Dr. Stafford was a student. He is quick to point out throughout the very tragic instances he relates that God did indeed work even this out for his good, allowing it to happen in order to prepare him to be an especially effective advocate for children in these difficult situations. In the concluding chapters, he goes on to explain how reaching children through ministries like Compassion that care for all needs — not just spiritual ones — helps to end the poverty cycle not just for one child but for an entire community. His final words are about his trip back to his boyhood village as an adult and the heartbreak he experienced as he saw what the years of poverty had done to his dearest friend. “What if Compassion had been here in my village when we were both children? How different things might have been… He could have stayed on course and become the pastor his heart so desired to be. Everything that had dashed my best friend’s dreams would have been prevented. This kind of work was going on worldwide, even at that moment, for a hundred thousand Alezyes, as I sat brokenhearted in my anger and grief.”

This is a sobering read. Many parts were difficult to get through, as they told truly horrible details about abuse and neglect. I know that Dr. Stafford must have only given us the tip of the iceberg, though, just to open our eyes but not completely overwhelm us as we read and consider what real poverty looks like. Just as there were these discouraging stories, though, there were also wonderful stories. One in particular told of how, when the Staffords’ daughter was born premature and was in critical condition, they wrote to their sponsored children and asked them to pray for her. A couple of years later, Dr. Stafford met one of these sponsored children at her center in South America, and she ran to meet him for the first time, asking, “How is Katie? I pray for her every day.” He relates how he went home and told his now healthy daughter that the prayers of a child in Ecuador had been answered by God on her behalf. He then tells how, years later, the girls met one another, burst into tears, and “exclaimed each in her own language, ‘Thank you for praying for me!'” He goes on to tell how his particular little girl is now a grown, educated woman, having risen above the poverty she was born into, an example of what Compassion can do in the lives of children all over the world.

This book was a great challenge to me, not only as I do what I can to alleviate poverty but also as I parent my two girls. It’s a challenge to churches as well, that if we don’t start making children a priority in not only our ministries but in our lives, we’re missing out on a huge portion of the harvest that the Lord has given to us.