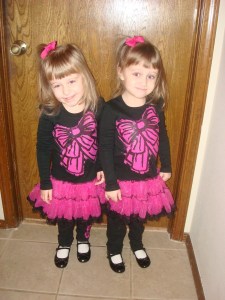 – The girls are back home! We picked them up on Saturday, and after the longest drive back to Oklahoma (three bathroom breaks in three hours!), they were reunited with all of the Christmas loot. The Calico Critters have stolen the Littlest Pet Shop food, the Zhu Zhu pets have had numerous traffic jams in the disco ballroom, and swimmin’ pup school Barbie keeps going skinny dipping. So many toys, so little time! (And we almost had our first Christmas casualty when Charlie attempted to eat a baby Calico Critter. I was able to retrieve its head and body as Emma kept moaning, “OH, POOR CALICO CRITTER!!!” It popped back together after some squeezing and pushing, thankfully. That little kitty has been through a lot, but her pain has been the girls’ gain as they now know to NOT leave things on the floor for Charlie.)

– Ana wasn’t so hot on the idea of going back to school. For someone who is just beginning to get a good understanding of the concept of time, not going to school for two weeks seemed like the beginning of forever to her, and hearing that she was going back so soon was not welcome news. But she went with only a minimal amount of grumbling, and now that she remembers how great it is, she’s back to her normal self. Emma isn’t thrilled that she’s gone for half a day every day, and Charlie is certainly not thrilled that he once again is the object of all of Emma’s attention and affections. (She had her whole little body wrapped around him in the kitchen the other day, and he was being so patient with her as she cackled and sang right in his ear. God bless that dog.)

– Charlie has recently come into his own as a big dog. Now that he’s just one month away from his first birthday and infinitely more graceful than he was before (no longer swiping all of the fridge magnets off the fridge with a swoosh of his tail, for example), I suspect that he’s done with the exponential growth. He seems to understand how big he is and what he’s capable of doing, as illustrated by his recent attempt to attack Wes. It wasn’t a real attack, given the fact that he never used his teeth, but when Wes picked me up off the ground and I started yelling for him to put me down, Charlie rushed in between us and jumped on him, which is out of character. Wes ended up with a pretty significant scratch on his arm, and Charlie didn’t leave my side for the rest of the afternoon. As I told Wes, there went any of his big plans to start beating me. Unless he wants to attempt to do that with a German Shepherd attached to his arm by the teeth.

– Wes and I finished up our 90 day Bible read-through, and the entire three months felt like a sprint. Sprinting is sometimes a good thing, though, and this particular one came at just the right time for us. We’ve started over for the new year but are slowing down to a six-month plan. We’re hoping this is a good medium between the sprint of three months and the slow year-long plan.

– I haven’t been doing much of anything in the new year, apart from playing with the girls. I think my big resolution this year is to not be so OCD about how my house looks, how quickly I can get the laundry done, and how organized everything is all the time. I’ve forfeited a lot of time with the girls in the past because I’ve put more importance on those things than is really necessary, so I’ve been taking a step back and just taking the time to be fully there with them this year. It won’t be long until they’re both in school all day, and I’ll have all the time in the world to keep a perfect home, right? Right.

And on that note, I better go and see what Emmy has planned for us today…