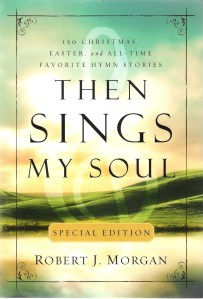 Robert J. Morgan’s book “Then Sings My Soul” is a collection of hymns and the stories of their origins. With each hymn Morgan reprints, he includes a short story about the hymn writer, detailing biographical information and tracing the hymn’s origin and its rise to prominence in many hymn collections.

Many of the stories were ones I had heard before, but there were a significant number that were new to me. While many were inspirational stories, some were surprising. In particular, many of the hymns were written by men who were universalists. For example, “It Came Upon A Midnight Clear” was written by a gentleman who didn’t believe much of anything about Christ at all, and as I thought about this and thought through the lyrics of that beloved Christmas song, I realized that — gasp! — it’s true! God is never mentioned in that song, so one of the songs we sing for Christ’s glory has absolutely nothing to do with Christ. (I was also a bit troubled by the section on patriotic songs, as I struggle to see how singing songs about our country constitutes any real worship of God. How are they even hymns?)

All in all, this was an interesting read, and it has certainly challenged me to actually think more deeply about what I’m singing and not to just assume that it’s all about God if it has a place in the hymnal.

Many thanks to Thomas Nelson Publishing for providing me with a complimentary copy of this book to review. All opinions expressed are mine entirely.