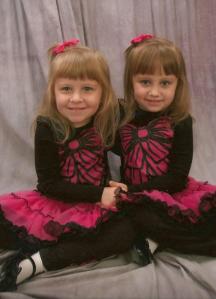 Ever had one of those weeks where you couldn’t catch your breath until… well, I’m still out of breath, and the week has been over for a while! But there are other reasons for that. (Which I’ll get to shortly, of course.)

It all began with church on Sunday. Sunday a week ago, that is. The Faulks start Sunday morning by arriving at the donut shop at 7am every week, where Wes picks up donuts for the youth and children’s classes… and where Ana and Emma convince him that they also need donuts. And chocolate milk. (And maybe I convince him that I need a little of both as well. Ahem.) From there, we head to church, where the girls and I walk the entire church building, praying over each classroom and hallway and break area and entrance and, well, everything short of the parking lot. I’ve just recently realized that they actually listen to what I’m praying, as Ana has taken to praying on her own, “God, help people not to be mean to Papi.” This is a great thing for a pastor’s daughter to learn to pray early on, don’t you think?

Then, it’s usually off to Papi’s office to eat our breakfast, then Sunday school, then church. This past week, we went out to lunch with a couple from the church, then came back home with enough time to change clothes and hustle back up to the church for Discipleship Training and Mission Friends. Then, it was on to the evening service which is more like a little WWF for me, as I try to keep two very wiggly girls still after a long, long day of being expected to act ten times more mature than they could possibly be. I gave up about halfway through the service and took them to the water fountain in the fellowship hall, where they entertained themselves by trying to get a drink. It’s a tricky thing, drinking out of a water fountain! Especially when your little sister is pushing the button for you and shooting water all over your face.

Monday was back to school for a very grumpy Ana, who was made even grumpier when I told her we were going to the dentist after school was over. Fun! No cavities for either girl, and Ana finally braved the x-ray machine this time around. Next time Emmy will be at the age where they start taking x-rays, and she is super excited about getting some pictures made of her teeth. (And speaking of pictures, Ana came home this week with her class picture. They line them up by height for these pictures, and I can now confirm without a doubt that Ana is the shortest kid in her class. By a whole head, y’all. But she’s also the prettiest, though, so there you go.)

I decided to pack a picnic lunch on Tuesday for the girls to enjoy at the park after we picked Ana up from school… and then, the temperature dropped like twenty degrees. What?! We didn’t even get any rain, so we couldn’t even appreciate the overcast skies and the cool breezes. We relocated the picnic to the kitchen table, and then I was off to our ladies’ Bible study at the church. Once we were done at the church, we went to visit a family from the church out at their property about thirty miles past the middle of nowhere. As the road turned from pavement to gravel to dirt, I seriously wondered if we were actually headed anywhere at all. Lo and behold, though, their house was actually at the end of the path, and the girls entertained all of us by getting dirtier than they have ever been in their entire lives. They rode the four wheel vehicle, checked on the deer stand, and all but laid right down in the dirt and made dirt angels. They were no fun to clean up afterwards, but we had such a great time visiting with this wonderful family.

Wednesday was an exciting day for Emma. She and I arrived for the 7:30am Pre-K enrollment (sniff, sniff) at 7:00am… and the line was already wrapped around the building. The people in front of us had gotten there at 5:00am (!!!), bound and determined to get their children into the all-day Pre-K program. Since we were only attempting to get Emma into the half-day program, we probably could have slept in a little, but I wanted to make sure she got in, so we joined the crazy throngs who shivered outside until we finally made it through the line and into the building at 8:30am. By a miraculous turn of events, no one’s head exploded when I handed over a copy of Emma’s Japanese birth certificate. And by an even more miraculous turn of events, all of her shot records are in ENGLISH and amounted to just two pages of paper. (I filled out Ana’s kindergarten registration this week also, and her shot records took about five pages with an additional “translation and explanation” page from me. Eesh.) Em seemed a bit confused that she wasn’t staying for class, but as I explained to her, that part will come soon enough. Sooner than I would like, actually.

As exciting as Wednesday was for Emma, it was NOT such an exciting day for us older Faulks. Do you remember several months ago when our AC unit was acting up and we found out we’d need a really expensive part replaced on it? Well, we went ahead and called our AC guy back out to replace the part, only to discover that our unit is, and I quote, a “money pit.” Not good, y’all. He told us he could replace the part and possibly get another year out of the unit, but that our unit is TWENTY-ONE YEARS OLD and that the fan is on its last leg. Which means that if the part is replaced today and the fan bites the dust tomorrow, the WHOLE unit will have to be replaced. His suggestion? Save the money on the part by paying right now for an entirely new unit… which is roughly three times more than we were planning on spending. Eek! We got three more quotes, and everyone confirmed that our unit is indeed a “money pit” (don’t you just love that encouraging expression?) and that the wisest thing to do is to just bite the bullet and buy a new unit. I’m not rejoicing now about this, but once the one hundred degree days hit and I have a cool house, I’m sure I’ll think it was worth every single penny. Right? (Just nod and agree. Makes me feel better.)

Wednesday night was capped off with a sermon that was clearly meant just for me. And I’m even more inclined to believe that since the man preaching it, you know, shares a room with me. (Ana kept echoing my “amen”s with her own “AMEN!!!!,” then would look at me with a devilish gleam in her eye. Gotta watch that one.)

I’m not even sure what we did on Thursday. Hmm. Clearly it was so exhausting that I can’t even remember now what it was. Or I’m blocking it out because it was just that bad. AH-HA! Now I remember! (I was indeed blocking it out.) I had the girls go out with me to the playroom for a little spring cleaning. Ana was especially good at tossing Emma’s toys to the “sell” pile but not quite as good as Emma was about totally melting down every time we suggested that some never played with toys needed to be moved out. Somehow, though, we got through it, and the girls — all on their own — made some good decisions. Next, we went through their closets and tried on everything. I always hated doing this as a kid, but really, there’s no better way to see what actually fits and what doesn’t.

Friday morning after school, the girls left town with my parents so that they could meet up with my sister’s family and take pictures of all four grandkids together. Wes and I waved good-bye to them, jumped in our own car, and left town as well! Just for the afternoon, of course, but it was much needed. And Wes had a coupon for free chips and queso at Chili’s, so how could we pass that up?

I planned on an 8am garage sale on Saturday, but when I started pulling the stuff out at 7:30, several cars stopped, so it began a little early. It was all good, though, because by 9:30, we were sold out! I love garage sales in Duncan. Never a lull in the crowds! I spent the rest of the day scrapbooking our WDW trip, and after church on Sunday, the girls arrived back home.

And why am I still out of breath? Because after a long winter’s nap, we’re running again. I wish I could muster up some real enthusiasm about this, but after two weeks of hitting the pavement consistently, I’m still kind of loathing the process. Isn’t that positive? Wes’s blood pressure is much improved, so it’s worth it. And I’m convinced that it will be easy to run in no time at all. Perhaps. Maybe. Oh, who am I kidding? It’s NEVER easy, but surely it will get easier than it is now. Kudos to you real athletes out there!

And now, it’s time to do the laundry. And catch Emma, who is sprinting through the house naked. Just another normal morning here at the Faulk house…