Right after Ana was born, there weren’t many calm, settling in kind of days. We were too busy driving her tiny newborn self all over Texas, getting documents, passports, and visas taken care of so that we could move to our first church. And when she was only eight weeks old, we boarded a plane to San Francisco, then to Taipei, and finally on to Okinawa, where Ana learned to crawl, walk, and talk in the halls of Central Baptist. 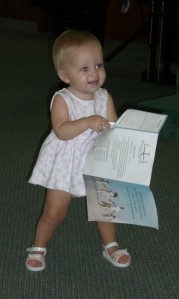 Emma was only four days old when she first went to the church. She slept through the entire VBS opening, had a poopy diaper changed in the lobby, and nursed in the pastor’s office. And while she only spent the first four months of her life at Central, she’s spent every week since at Western Heights, growing from a baby to a big girl. 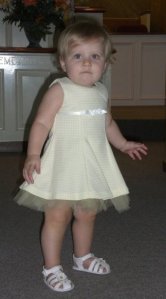 They’ve always been in church. They’ve always been PKs. They’ve never known any different. Surely everyone’s Papi spends almost all of his time with church people, preaches every Sunday and Wednesday, and has a whole cast of characters complaining to him and about him. And surely every girl is expected to be a front and center part of what Papi is doing, along with Mommy, smiling and caring even when people aren’t being nice.

During this season, I’ve found myself wondering what the long term effects of some of this will have on our PKs. I do my best at shielding them from the ugly sides of ministry and keep them as oblivious to church conflict as I can… while we’re actually in the church building. Unfortunately, I don’t do such a great job at home, and recently, I’ve found myself taking the stress and frustration from church out on them. Just a few weeks ago, Ana and I were both in tears as I explained to her how hard life is right now at church and how wrong I was for letting it affect our lives at home. They know I’m not perfect, and this is a great lesson to learn, even this early on. But, unfortunately, they’re also learning that no one hurts Mommy and Papi more than church people.

As I’ve been monitoring my own example to the girls and apologizing when I don’t measure up to who Christ has called me to be, I feel a real helplessness over my inability to protect them from everything. As much as we try, we know that they know, whether by our own mistakes or through heartbreaking observation that ministry is not easy. Will our girls ever be able to trust churches? Will they ever be able to trust people? Will they be so completely turned off to ministry that they’ll run from opportunities to serve Christ? Or will they see what’s happening, know that it doesn’t match up to what they already know about Jesus, and discern that people can fail you but that doesn’t change who God is?

At IMB training nearly ten years ago, I remember sitting in on a session where the speaker addressed young families who were concerned about how moving all the way around the world would affect their children. “If God has called you to this,” he told moms and dads, “then you can be certain that He has called your children to this as well.” God knew those precious babies, knew the map of their lives, and knew how even this hard thing — leaving behind everything for the call of Christ — would figure into their stories. I know that God knows Ana and Emma, that He knows how their own stories will play out, and that He has called them to be PKs and to have every part of their lives somehow touched by the local church. Surely He will allow even the bad parts of this season to be used for His greater glory in their hearts. Surely.

Ana put her arm around me a couple of weeks ago after a particularly trying time at the church and told me, in her super serious voice, “Mommy, I think I would like to pray for you.” I told her that would be much appreciated, and so she began a long prayer that started with my problems and ended with her asking Jesus to help Mommy buy the right kind of candy at the store next time, amen. Then, she ran off to play, promptly dismissing the issues that are such a big part of our lives right now. How I wish I could do the same sometimes!

I don’t know how everything will play out, and I don’t know how this season and all the seasons that are sure to come will affect our girls. But I’m trusting that God means it all for His glory and that He’ll save even these PKs…

Any words of wisdom from other ministry moms out there?