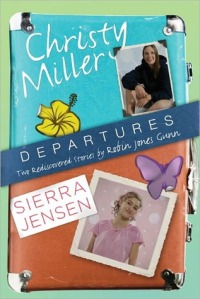 Departures, a young adult fiction book by Robin Jones Gunn, contains two novellas. Both stories are set during trips taken as part of summer vacation, and both stories have main characters that have their own books series, also by Gunn.

Now Boarding at Gate 10 is the story of Christy Miller’s visit to Wisconsin. Christy has just graduated from high school in California, is still healing from her first broken heart, and finds herself feeling strangely at home in the tiny community she hasn’t been to in three years. As she celebrates her grandparents’ fiftieth wedding anniversary and reconnects with an old crush, she questions what love really is, how God would have her to live, and what makes for a meaningful, lifelong committment to another person.

In the Event of a Water Landing follows Sierra Jensen through mix-ups, misunderstandings, and changing friendships, as she travels to the river for a weekend with her best friend’s family. The two fifteen year old girls find themselves at odds with one another as one new guy after another enters the story and makes them both act (for lack of a better word) crazy. How is Sierra supposed to navigate this strange time in her life? Do friendships have to change once boys enter the picture? And what purpose does God have for her life?

I hadn’t read any of Gunn’s novels until now, so I’m not sure how her young adult fiction differs from her regular fiction. At some points, I felt as though there was either no plot or just a very slow plot in both of these stories. More attention seemed to be given to telling me how bags were being unpacked than how the plot was advancing. In a way, though, this perfectly captured the life of a teenager, as did the large amounts of text where the main characters were agonizing over life changes and questioning what they were supposed to do, how they were to live, and what the next few years held for them. I thought those characterizations were entirely accurate (and gave me a bit of a headache as I well remember being fifteen and falling in temporary love with every breathing male in a ten mile radius), but the realizations that the girls came to seeemd a bit mature for them. For example, when Christy felt threatened by a girl who was interested in her crush, her response was to see how the girl was hurting and to minister to her. And when Sierra saw her best friend flirting with the guy she herself liked, her response was to tell herself that she had plenty of time to grow up and to not rush life. Both responses were very mature and adult, which didn’t seem entirely true to the characters’ earlier behavior. Without these conclusions, though, the novellas wouldn’t have been such great life lesson teachers for young readers, so I could still appreciate them.

Once my girls are young ladies who want to read good, clean fiction, I will definitely point them in the direction of Gunn’s books and these two series in particular.

Many thanks to Waterbrook Multnomah Publishing for providing me with a copy of this book to review. All opinions expressed are mine entirely.