It’s 5:17pm… and 104 degrees outside! I would say that it’s worse in Texas (because Texas is always hot), but would you believe that Oklahoma is hotter than Texas right now?! How do we get colder winters AND hotter summers than Texas?! Is the hole in the ozone directly over the Sooner State?! Even when the wind blows it feels like someone has turned on a giant blow dryer.

I have figured out how to make it seem less severe, though. My last ten mile run started at 106 degrees (!!!), and by the time I had sweat through that, the sun had gone down and the temperature had mercifully dropped down to 100 degrees. It felt like Christmas had come early, y’all. I told Wes, upon arriving back home, “Feel that BREEZE?!” He didn’t think it was nearly as cool as I did, but he would have been dancing in it just like I was if he had braved the 106 degree run.

Wes and I, after much breathless anticipation and general giddiness (which was probably due in part to the heat!), went to see the final Harry Potter movie. We had heard some buzz about it being the worst movie in the whole series… buzz which turned out to be totally FALSE! I think this was one of the best movies of the series. I didn’t know if they were going to be able to tie it all up like the book did, but I think the ending was perfect. I was still hesitant to leave even as the credits were done rolling because, hello?! What are we supposed to do now that there are no more Harry Potter movies?! Get a life, you say? Oh. That might be a good idea.

Anyway, thanks to a birthday gift card (yes, Wes still had one!), we were able to eat dinner out afterwards, which was a treat. We’ve been eating in all month because of the youth camp food. You ever wonder what happens to the leftover food from youth camp? Here at our church, what will spoil if not eaten quickly is transported from coolers into the pastor’s fridge with the strict admonition to, “Eat it! Eat it ALL!” And, boy, have we been trying our best to get it eaten before it goes bad. We started with enchiladas (which were delicious!), and after a week of that, we moved to burgers and hot dogs. Now we’re having tacos. I think there were five pounds of cheese (or was it more?) in our fridge at one point, and we’ve plowed through over half of it. We’ve eaten cheese on everything, y’all. It’s been so cheese-tastic that today Emma requested a “hot dog with lotsa, lotsa CHEESE!” And I obliged, because that particular bag of cheese probably only has one or two more days before it turns. Mmm… cheese… It’s a good thing we run about twenty-three miles a week (!!!) because we’d have gained about thirty pounds of cheese fat without it. (How would five pounds of cheese translate to thirty pounds of human fat? Tis the miraculous nature of cheese, y’all.)

Yes, twenty-three miles a week! Five on Monday, three on Tuesday, five on Wednesday, then ten on Saturday. (Or Thursday or Friday. We’re flexible on that big run.) Wes recently asked me if I would keep running after we’re done training for a marathon, and I really had to think about it. I honestly think I’ll keep running, but I don’t know that I’ll keep running this much. It’s kind of all consuming at the moment, as we stick to this training schedule and prepare ourselves for January. I probably blog about it too much, but four days before our first half marathon (AAAAAHHHHH!!!!), I’m finding it difficult to think about anything else but how far I’m running, how fast (or slow!) I am, and how many miles it takes to burn off all that cheese.

Next week, we’ll be celebrating a fifth birthday and a fourth birthday. I would say something about how kids grow up too fast and how it seems like just yesterday that they were tiny babies, but you’ve heard it before. (Doesn’t make it any less true, though!) Ana and Emma know all about birthdays now and have pointed out to me on several occasions that “we will get PRESENTS soon!” Yeah, that’s pretty much what birthdays are for. They’re finally old enough to actually care about the charm bracelets that we give them. Well, kinda. They’re old enough to want to guess what charm we’ve put on for the year, which is a great departure from the early days when all they cared to do was put the bracelets in their mouths. We’re making progress! (For those who don’t know, we gifted the girls with charm bracelets at birth and add a new charm every year for their birthday.) 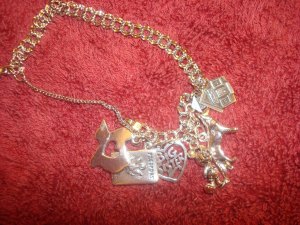 We picked out a princess crown for Emma’s charm since she’s spent this whole year believing that she is actually a princess. I tried to convince Wes that she needed a dachshund charm since she pretends to be BC more than she pretends to be a princess, but he thought that was silly. Emma was trying to guess what charm we got this year, and you know what her first hopeful guess was? “Did you get me a BeeCees charm?!” Ah-ha! I knew she wanted one!

Oh, well. I’m sure she’ll appreciate not hearing during every birthday from here on out how she loved pretending to be our dead dog. You’ll thank us one day, Emmy!