It’s been a while since I posted. In fact, the last time I posted, over a week ago, I was getting Emma through a little cold. And by “getting Emma through,” I mean that I spent the great majority of my time trying to get her to just blow her nose already. (Which is a no brainer when you’re thirtysomething, but when you’re four? It just never occurs to you that one good blow could save you ten million wipes with tissues that, no matter how soft or lotion-y, will still rub you completely raw so that you’re an irritable beast whenever your mother says, “Holy cow, Emma, you have a river of goo running straight into your mouth!” while she tries to wipe it once again.)

And THEN, I came down with the same thing, except mine came with a fever and didn’t leave for a good, long while. We took a trip down to Fort Worth during the worst of it, and I was so hyped up on cold meds that on the drive back, during the first thunderstorm we’ve seen since April (hooray for rain!), I wasn’t nearly as alarmed as I should have been when our car just might have been struck by lightning. We heard the boom and saw the flash at the exact same time, which I think means that we were pretty close to where it hit. By some bizarre twist of fate (bizarre because Wes drives 99.9% of the time), I was the one behind the wheel, and between the lightning, the torrential downpour, and my cold meds wearing off, I was having some serious come to Jesus moments on the road back to Oklahoma. All that fretting and pleading must have worn down what immunity I did have, because by the time we got back home, the cold just got worse and worse. Those Pre-K germs (because I’m pretty sure that’s where this all originated) are TOUGH.

I’m happy to report that I’m back to 100%. I had to take a few days off from running and was nervous that I’d fall behind in the training, but I was able to keep up with Wes on our long run this weekend. He opted to take a route that included running on 81, which came with its own thrills, thanks to the high volume of eighteen wheelers speeding by. (You’ll run faster than you think you can in those circumstances!)

The girls were super helpful during all of this and managed to maintain a reasonable level of sanity during the worst of the fever. They got to shop for and pack their Operation Christmas Child boxes with Papi, which took up a good deal of time… 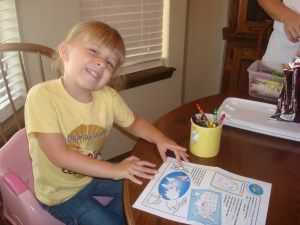 They also got to enjoy several Papi-made meals while I was under the weather, which may or may not have included Goldfish pancakes (pancakes with Goldfish crackers in the batter), Papi tortugas (cheese quesadillas with loads of cheese and real butter), and a staggering number of Reese’s peanut butter cups. I also came in one evening to find them eating what they claimed was octopus but was, in reality, just cooked, rolled up lasagna noodles sans sauce. In other words, we’re lucky the girls survived this round of Mommy Fever.

During all of this, I agreed to do away with our telephone/cable/internet. Clearly, I was still feverish. We’ve been with our cable company for four years now, and while the service has never been stellar, it has recently gotten really bad. The phone will cut out while we’re on it, and the internet will stop working for hours. Plus, the price for all of this has increased periodically until what was a bargain four years ago is now nearly TWICE as expensive as it initially was. I kept insisting that we stay with them, though, because everyone HAS to have a land line, right? Wes finally convinced me that, no, not everyone has to have a land line. Sigh. We’re switching to cell phones only, getting rid of the cable TV (which we don’t watch enough to justify the cost anyway), and saying good-bye to the internet. Wes tells me that everything I do online now I’ll be able to do on a cell phone (we’ll see about that!), so we’re actually saving money in the long run. I haven’t had a real cell phone since before cell phones did anything but actually call people, so this will be one small step for the rest of the of civilized world and one giant leap for Jennifer Faulk.

And speaking of leaping into the 21st century (yes, you read that right), Ana has decided that even with all of our modern ways of getting in touch with others, she would rather just write a letter and mail it. You know, since writing and reading skills are the newest thing for her, not to mention the thrill of putting something in the mailbox…

Kendall, let me know if you need help deciphering that Ana-script.

One thought on “Fever!”