… kind of. There are still boxes everywhere, and I’m not sure where half of our clothes are. BUT we’ve been residents of Pasadena for a full week now! And that counts as “settled in.” Sort of.

Most of you know that this is not my first time in Houston. I went to college at UH, so I lived here for four years. What I never could have guessed, though, was how very unhelpful all the geographical knowledge I gleaned in those years would be now. I have no clue where anything is in Pasadena which, while relatively close to Ye Olde Public University, is a whole new part of Houston. But we’ll figure it out! Theoretically.

The girls are doing well. Ana was elated to find a Wal Mart on our second day in town. Right before we left Duncan, she had some concerns about Houston, the primary one being that she wasn’t sure we’d have food here. (Likely because she saw me clean out the fridge right before the movers came.) I assured her that there were MANY grocery stores in Pasadena and MANY restaurants. “Yes,” she said, “but do they have Wal Mart?” Bless her little heart! We have been so dependent on Wal Mart as the only place to shop these last four years that she assumed it was the ONLY place. Her fears were put to rest early on last week, though, as we showed her other places to shop… then went back to Wal Mart for her. Stick with what you know, I guess.

Emmy, in the meantime, has become obsessed with a place called Jimmy Changas. I think the playground and the monkey decor enthralls her more than the food, but whatever it is has her asking for it more often than it’s healthy for any of us to have it. She’s also managed to convince me that one day owning a home with stairs could be a great thing as she entertains herself for literally hours by climbing up and down the stairs in the house we’re renting. Emma Faulk – stairmaster!

In between moving and Wes starting work here, we’ve been keeping up with our marathon training. It’s a real blessing that the move happened right as our tapering began because with all that’s going on, I don’t know how we would have fit the long runs in. We’ve found a great place to run in a neighborhood park close to the church, and the other night, a couple of deer ran right in front of us as we were following the trail. I’m convinced that they scared us more than we scared them! We’re less than a week away from the marathon now and hoping that there will be no deer on the course there. If there are, surely the 55000 other runners will scare them off long before we get there, right?

Hope your new year is off to a great start! 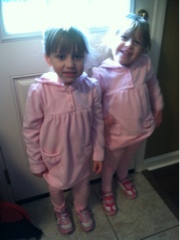