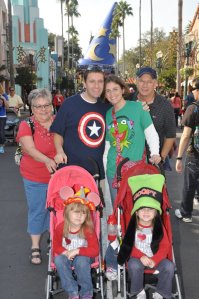 Our original plan, back when we were first looking at this trip, was to do what we had always done – hit the Extra Magic Hours (hours early in the day or late at night when selected parks are only open to Disney hotel guests) every chance we got. What we discovered on this Extra Magic Hours day, though, was that if you don’t hit it right at the opening, you’re there for the BIGGEST crowds in all of the World. Seriously, it makes better sense to skip the Extra Magic Hours and go to one of the other parks because the crowds aren’t as bad. I’m saying this as the banner-waving, longtime cheerleader for Extra Magic Hours, so believe me when I say that I’ve tried it both ways, and this way works better.

That said, we arrived at Hollywood Studios AFTER the Extra Magic Hours and quickly determined that this would be a “show” day. We were going to come back another day and do the rides (many of which were already getting really late on their Fast Pass times, like Toy Story Midway Mania) and spend our time going to the shows and meeting characters. This would also save our feet since we’d be using them just a little at the marathon the next day, you know. We did go on Star Tours because there was no wait, and Emma managed to ride it twice – once with Wes and me and once with Jim and Sandi — thanks to the stroller swap passes we got because Ana opted out. Em was even the secret rebel spy on her second flight. Exciting!

After a high-carb lunch (do hot dogs and fries count as high carbs?), we watched Muppet Vision 3D (again, this one never gets old with Emma), met Phineaus and Ferb (where Papi was part of the show), and went over to the Animation Courtyard to meet Mickey Mouse and Pooh Bear. FINALLY, Emmy got to meet Mickey Mouse. (She would make it a point to meet Mickey at each of the four parks this year. And get his autograph and picture each and every time.) We finished up at the Disney Junior show, then met Jake from Jake and the Neverland Pirates. Emma gave him one of the golden coins she got during the show in exchange for his autograph. (She was all about the autographs this year!)

With an early, early morning up ahead, we went back to the hotel, did a little exploration of all the cool stuff on the grounds (a giant Mickey phone and Big Wheel right by our room, a huge Mr. and Mrs. Potato Head, Jungle Book characters, etc.), played on the playground, and had a pasta dinner in the food court.