I love the Bibbidi Bobbidi Boutique. It is, hands down, one of my favorite Disney experiences, and it is always worth the time to stop and have your little girl transformed into her favorite princess.

Last year, our girls picked out their dresses once they got to the Boutique. This was so much fun for them, but poor Ana ended up freaking out about her Ariel costume ten minutes after she was done at the BBB, insisting that we change her into something more familiar. To save on costs and to save ourselves from a repeat of this problem, we had the girls bring dresses from home. That way, I was able to test out the dress on Ana long before we got to WDW, pin up her long skirt before we got to the Boutique, and include a long sleeve shirt under the to reduce the scratchiness that I knew would have otherwise prevented her from wearing it all day long. We were prepared! (Oh, and Emma? Yeah, we didn’t have to prepare nearly as much because she would wear an outfit made entirely of sandpaper and rusty nails if she was told she’s beautiful. She knows how to sacrifice for fashion!)

Would it work? Would Ana still be a princess at midnight, or would she have left her glass slipper (and her dress) on the castle steps hours before? I know, I know – you can hardly stand the suspense!

Once we got to the Magic Kingdom, we were let in prior to the park’s opening because of our early appointment. Main Street, while still bustling with those on their way to breakfast reservations and other BBB patrons, was much emptier than normal, so we were able to enjoy it in a whole new way.

As soon as we were inside the castle, the girls were quickly ushered to their salon chairs and their own Fairy Godmothers, who helped them to pick out their hairstyle and makeup choices. Emma picked out the same bouffant hairstyle she chose last year (except this year, she went with blonde instead of brown), and Ana, in an uncharacteristic move, picked the crazy, poking-up-everywhere, rainbow hair. To each her own, I suppose. After a long time spent primping and after many, many, many pounds of glitter was spread, the girls were ready!

Emma looked like a contestant on Toddlers and Tiaras…

… only much sweeter, of course.

And Ana, bless her heart, looked a little like Sonny Eclipse. 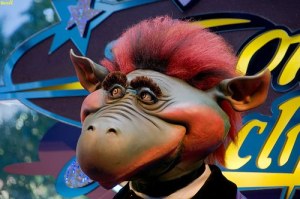 Oh, come on. The hair is more than just a little similar, right?!

And one of them together…

We quickly made our way over to Castle Couture, where they had those beautiful photos taken (hooray for PhotoPass!), then we scurried back over to Main Street to meet Mickey, Minnie, and the princesses. On our way over, we had a group of Canadian tourists ask to take a picture with the girls. This would be a recurring theme – international tourists who wanted pictures with the Faulkettes. I can’t say that this was all that odd to me, since baby Ana was something of a celebrity back in Okinawa. Every time we’d go to the aquarium there, people would snap pictures of her, sometimes going so far as to as to pose with her while I took their picture. (Seriously!) Something about a white baby with crazy, big eyes just really made for some excited Japanese ladies. We even had a waitress at a restaurant once come by our table, pick Ana up, and take her back to the back to meet all the chefs. As my mother commented on another occasion, as several cameras were going off around Ana as she giggled about something, “It’s like we’re traveling with Angelina Jolie!”

Anyway, I’m not sure Ana remembers any of her foreign stardom, but she was quick with the smiles at WDW this year. Guess you never forget how to be a celebrity.

After many, many pictures, we headed towards the Main Street train station for a trip around the Magic Kingdom. Em got a good look at the inside of Splash Mountain, we got a good look at the workers refurbishing Big Thunder Mountain (“how very un-Disney,” Wes commented as we watched them walk the track in their hard hats, ruining the effect of the Wild West surroundings), and we tried our best to get a gander at what’s going on in the old ToonTown. Lots of new buildings, but we still can’t tell what’s going on there, thanks to limited visibility from huge tarps. I’m sure whatever’s going on back there is awesome, though. Can’t wait for the New Fantasyland!

We disembarked from the train at Main Street, and Emma told us that Sonny Eclipse needed to see her dressed as a princess. So, on we went to Cosmic Ray’s for lunch. We made our way to the Teacups afterwards, then to the Winnie the Pooh Ride. From there, we went back towards Frontierland, where we caught the Country Bear Jamboree. Then, after two years of saying it was her favorite ride, Emma finally rode Splash Mountain, aka the Bunny Ride, for the first time. How did she know it was her favorite if she had never ridden it? She just knew, y’all.

Our last stop at the Magic Kingdom was Pixie Hollow, which is now located in Adventureland. While they waited to meet the fairies, Ana enjoyed some popcorn, and Emma enjoyed a lollipop. These are their standard Disney snacks (always their first choice when they’re given an option of anything the parks have to offer), and they had me wishing for a Mickey ice cream bar. Don’t worry – my time would come.

After meeting the fairies, we hopped on the monorail and made our way over to Epcot for dinner. Why didn’t we just eat at the Magic Kingdom? Well, I suspect it’s because Wes had a hankering for sushi, but he didn’t tell us what he was thinking until we had walked halfway around the World Showcase, starting in Mexico. We stopped in the American pavilion, where we picked up food for the girls, and Jim and Sandi picked up their own food. Wes convinced me to go just a little further to pick up a sushi tray in Japan, and since I had already put eight thousand miles on my tired legs, I just kept walking until I got to the fish and chips stand in the United Kingdom. At that point, it probably would’ve been quicker for me to just finish out in Canada and walk back to America via Mexico (because I had almost made the full circle!), but I went back the way I came. After taking both girls to the potty (why is the American pavilion bathroom another eight thousand miles away?!), I finally got to eat. It was so good, and I was so stuffed… but not stuffed enough to say no to joining Wes for a trip through the chocolate shop in Germany. Mmmm…

From there, we walked back to Mexico where we rode the Three Caballeros ride. Ana was delighted and would have probably ridden it three more times, but the rest of us were really starting to drag, so we headed back to the entrance of Future World, boarded a bus, and headed on back to Pop Century.

And for those who are wondering, I’m happy to report that Ana spent the ENTIRE DAY in her princess dress.

It was a very good day.