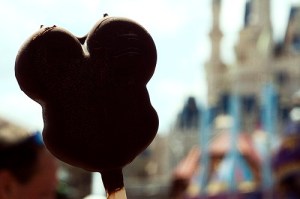 The next day began with doom and gloom.

Well, not really. It was just a rainy Florida day. Fortunately, we were all prepared and ready with our rain ponchos on as we walked through the front gates at Epcot.

I have to tell you that at this point in the vacation, two improbabilities were taking place. The first was that the girls still had their crazy Bibbidi Bobbidi hair on. (And it was CRAZY after two days and nights in it.) The second was that I had yet to get a Mickey Mouse ice cream bar. Yeah, neither one of those improbabilities was pretty. And they would only get uglier as the day wore on…

We began, like anyone with any sense will, at Soarin. Finally, Ana and Emma were both tall enough to ride Soarin! Ana had some reservations about it at first, but after our ride (and we were the FIRST ones on the ride that day), she said, “I want to ride it AGAIN!” Sandi and I took the girls back on the ride again as Wes and Jim went to go get Fast Passes for Test Track. I think Ana would have spent all day riding Soarin over and over again, but we convinced her to go to the other side of Future World with us. Jim and Wes rode Mission Space while Sandi and I watched a tour group of Brazilian teenage girls take turns taking pictures with Ana and Emma. (I don’t get it, but it happens.) Once the guys were done with the ride, it was our turn to ride. I’ve ridden it before, and neither Sandi nor I cared to ride it again that morning, so we all headed to Test Track early. Ana, showing exceptional bravery, got on the ride with us, but very quickly determined, with the brake tests, that this was NOT her favorite. We congratulated her for giving it a try anyway, even as she continued to tell us that she would never ride that again. (I could sympathize.)

We stopped at the Character Spot so that Emma could continue her quest to meet Mickey in all four parks. We ended up meeting five different characters there, and for that kind of “character volume,” the line wasn’t so bad. One line gets you to all the characters, so it’s worth the small (in comparison) wait in line, especially if you do it early in the day like we did.

At this point, Ana told Nana that, “Nana, I think you need to buy me a Duffy Bear.” While Ana owns two smaller Duffy Bears, she doesn’t yet have the 17” Duffy Bear that can wear all the Duffy Bear clothing and accessories that (surprise!) they also happen to sell at Walt Disney World. While Nana was well within her rights to tell Ana to take a hike for this suggestion, she made a deal with her involving escalators. For some reason, Ana decided early on in the week that escalators were terrifying, and she absolutely melted down whenever we came to one. With Duffy as motivation, though, she scaled the escalators at Sunshine Seasons (Wes’s favorite lunchtime spot at Epcot) without fuss. She did fall out of her chair at lunch, however, so there were still tears. Sad day.

While we were eating lunch, it was pouring rain outside. In no rush to go back out into that, we boarded the boats at Living with the Land, hoping to wait out the worst of the storm. We didn’t count on THE RIDE BREAKING DOWN while we were on it, trapping us for thirty minutes in a sea of veggies. “The only danger is that we’re going to die of boredom,” Wes said, as Ana (a vegetable hater) was endlessly intrigued by all the different plants and veggie goodness. Mercifully, the ride started up again before too long, and we hightailed it out of the Land pavilion and into the rain, taking our chances as we made our way to the Nemo ride and Turtle Talk with Crush. It was still raining when we exited there, and the strollers were drenched, so we stopped over at Journey into Imagination, hoping the rain would let up while we were following Figment. Ana and Emma got on the computers at the end of the ride and emailed themselves some girl Figments named (what else?) Girl Figment and Red, who ironically enough, was yellow. Hmm.

Wes and I took the girls over to meet Duffy Bear while Nana and Coach stayed behind to watch Captain EO. And that’s when it REALLY started raining. We made it into the Duffy Bear gift shop to wait it out, keeping our fingers crossed that this wouldn’t keep up for long. Fortunately for us, the downpour was over as quickly as it came, and just as the sun peeked back out, Duffy came out to the greeting spot, where Emma latched onto him as though she would never let go. (She did let go, however, when Nana reappeared and took Ana and Emma BOTH into the gift shop to get them their very own Duffy Bears and accessories.)

And with that? Future World was done. In record time!

We moved on towards the World Showcase, stopping in Mexico to ride the Three Caballeros (again!) and to meet Mexico Donald. Ana told him that he was her absolute favorite (which he is), prompting him to dance an excited little jig for her. I just love Disney cast members. That little performance was the highlight of Ana’s day!

While we were in Mexico, the girls picked up Duffy Bear signs so that they could get stamps at all the KidCot stops. Do you know what that means? That means they were Stamp Nazis for the rest of the day, demanding that we stop at each and every country along the way. In their quest to stamp up their Duffy Bears, they met Mulan, and we squeezed in dinner in Morocco. (Which thrilled Coach’s soul, let me tell you.) At this point, I started looking for an ice cream cart that sold Mickey bars, and as we finished up the World Showcase and exited back into Future World, I began to lose hope. I had mentioned that I would be just as pleased with a trip to Beaches and Cream at the Beach Club Resort (rumored to have the best chocolate milkshakes on Walt Disney World property), but we were going the wrong direction for that to happen. Besides, no one really felt like walking all the way out there then all the way back through Epcot then to the buses, etc, etc.

I had a Mickey Bar meltdown.

To this day, in my rational and logical frame of mind, I still stand by my conviction that after someone runs 26.2 miles, she’s entitled to a little ice cream. Here we were, days after said marathon, and I was still waiting. I kept looking and looking for an ice cream cart that was nowhere to be found, and by the time we got into Future World, I was getting desperate. Wes suggested that we just go to the ice cream shop (that doesn’t sell the Mickey Bars) over by Club Cool, and I said, “Great! Whatever! I’m going to keep walking until I find one of those carts!” He expressed some concern about this, and I shrieked, “I’m a grown woman! I think I can walk around Walt Disney World by myself! I WANT A MICKEY BAR!” Awesome.

He wisely took the girls and left me to my own devices. I finally found an ice cream cart next to the Mousegear shop, ordered my Mickey Bar, and unashamedly tore right into it. Ahh… all was right with the world again.

So right, in fact, that when I suggested a spin on Spaceship Earth, no one crossed me and everyone piled obediently into their separate cars and went on up into the big ball. Oh, I kid. Everyone wanted to ride the ride already, so my gnashing of teeth and frothing at the mouth while screeching, “MICKEY BAR!!!” had nothing to do with their compliance.

(On a completely random side note, I’ve discovered here at home that Blue Bell Moo Bars are essentially the same thing as Mickey bars. Without, of course, the cool Mickey shape, which makes them inferior to the real thing. But, hey, with our next trip to Walt Disney World still unscheduled, I’ll take what I can get. Hooray for Moo Bars!)

We ended the night with a trip through Club Cool, where I almost lost the girls. And just about lost my marbles from all the stress and ice cream overload. So, we decided to go back to Pop Century. (And on the ride back, I took down the girls’ crazy hair, which had grown to ridiculous heights and tangle levels.)

Up next… the day that almost wasn’t. Did the family leave me behind at the resort and go far, far away where no Mickey bars were to be found? Stay tuned to find out!