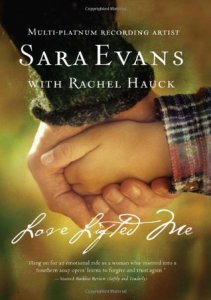 Jade Benson, after learning of her husband’s infidelity, is learning to finally trust him again. She hopes that, for the sake of her new son, Asa, they can make a new start in their marriage and move on from the hurt and betrayal. Her husband, Max, is dealing with his own issues, recovering from a drug dependency, and as he makes a plan to change careers and move halfway across the country, he tries to show Jade that he’s a changed man. However, the problems from the past keep coming back up, with a revelation about Asa’s paternity and great conflict in Max’s new career and hometown. Will they be able to make a new life together, even with all of these complications?

Sara Evans and Rachel Hauck have teamed up again for this third installment in the Songbird series. They write very honest characters, although this book felt like the problems were a little too dramatic for real life. The “bad guys” were so bad that they were nearly comical, which made them seem less real than the leading characters. The book was still a great read, though, and I really enjoyed the series. I would definitely read another book by these same writers.

Many thanks to Thomas Nelson Publishing for providing me with a copy of this book. All opinions expressed are mine entirely.