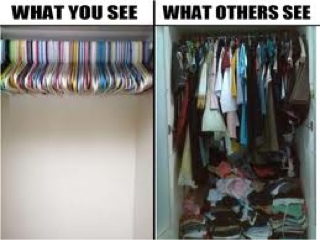 Granted, we had just finished a long run, which I had prepared for by drinking twice my normal weight in water (or so it felt!), but in my thinking, that should NOT have accounted for the initial three pounds post-race, plus the other four that were hanging on by the end of the day. As Wes tried to tell me that it was water weight (that doubled after the race?!) and that it would come off, I had a mini-crisis, the culmination of which led me to exclaim, “I have nothing to wear!!!”

The truth is that I DID have plenty of somethings to wear, but the great majority of them made my rear end look ginormous. (Which they well should have since I gained SEVEN POUNDS in one day!) And I? Was NOT glad about wearing jeans that did that. What would people think? What would they say? Just how many words would be spoken in the quiet corners of our church about the pastor’s wife’s hefty backside? More than could be counted, I feared. Oh, the horror!

It was, at this point in my freak out, that I concluded the “clothing” chapter of 7. And here’s what really hit me…

“In my self-important mind, everyone would notice my repetitions and whisper about my wardrobe. People would obsess about my attire. You know what I discovered? Others aren’t thinking about me nearly as much as I thought they were.”

Oh, y’all, I know this. I don’t normally obsess about clothes, my hair, or makeup. I know it really doesn’t matter in the grand scheme of things. I’ve prided myself on how infrequently I go shopping for clothes.

Well, that’s great. But, as evidenced by my “nothing to wear” episode, I use clothes to gain approval and favor with others, even if I’ve been doing it subconsciously. It all goes back to finding significance in something outside of Christ, which I never would have guessed I’d be tempted to do when it came to something like clothing. Honestly, the example given in 7 of wearing just seven items of clothing for a month sounded liberating to me, which showed me, even before those horrific seven pounds, that I was putting more importance into what I was wearing than was probably warranted. And my closet, which I think is modestly filled? Can’t hold all of my clothes.

And I thought this would be the “easy” chapter…

5 thoughts on “7 Pounds and My Huge Backside”