With any move, there are going to be some casualties.

I should know. Our first big move as the Faulk family came in 2006, when we sold, gave away, and auctioned off most of what we had to make the big move to Japan. I was okay with all of it, but I did shed more than a few tears when it came time to sell my Mustang. Sigh. Just a casualty of moving.

In all of our moves, we’ve always found a place with room enough for the girls to have their own separate playroom. This has provided absolutely no motivation for us to go through the mountains of toys the girls own and weed out those that they’ve outgrown. Our new house, however, does NOT have a playroom, and we’ve finally, blessedly, been forced to reckon with the mess that is Ana and Emma’s playroom.

A few weeks ago, we went through and sorted out toys that we were going to take to Goodwill, toys that were broken and needed to be thrown away, and toys that we would keep. The girls were great — making better decisions than I would have, clearing out space, and helping out so much. We managed to get the toys down to an amount that they could comfortably keep in their own rooms.

In the process, however, Ana mistakenly gave away a stuffed cat from Build A Bear. I’ve never actually seen her play with this cat. I’ve never heard her talk about this cat. I do, however, distinctly remember her telling me, “I’m done with Kitty Meow.” “Are you sure?,” I asked. “Yes! Give her away!” HER choice, I told myself, putting Kitty Meow in the Goodwill pile.

Well, I was regretting that about a week later, when Ana was beside herself over the long lost Kitty Meow.

I went to Goodwill to see if she was still there. She was already gone. I called Build A Bear to see if they had more Kitty Meows. They didn’t. I called FIVE other Build A Bear stores, ranging from San Antonio to Dallas to Fort Worth to all over Houston, looking for another Kitty Meow. It was a lost cause. No one has a Kitty Meow!

We explained what had happened to Ana, told her that it had been her choice to be done with Kitty Meow, and promised her that now, Kitty Meow was with another little girl who would love her and care for her. This seemed to make Ana feel better. (And then, she felt even better when Wes went to Build A Bear and made her another cat. Pretty Kitty is not just like Kitty Meow, but Ana declared her, “Even better!” Whew.)

Given all of the emotional trauma and upset this has caused, I’ve determined that I cannot take any more casualties this move. That’s why I experienced some mild panic when I couldn’t find ANOTHER beloved cat in Ana’s room.

Fortunately, Ana didn’t realize he was missing when she left for Gram and Gramps’s house last week. Em and I made a trip to Goodwill to drop off some outgrown clothes, and we decided to go in and look around… because I secretly hoped we would find Mittens on the shelf.

Lo and behold, while Emma flipped out over a stuffed Dumbo baby ($2.99, while they sell the exact same thing at WDW for $20, what a find!), I located Mittens in a sea of stuffed animals. I snatched him up quickly and told Emma, “Look! It’s Mittens!” She chatted with me about how lucky it was that we found him as we paid for Mittens and Dumbo, as we walked out to the car, and as we got ready to drive home. Then, after a moment of silence, she said, “Mommy, I think Mittens GROW-DED!” 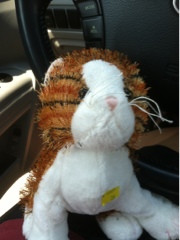 Well, I hadn’t noticed in the store… but Mittens was indeed bigger than I remembered!

“Maybe that’s because he’s been eating his vitamins,” I told her… but I suspected that this was NOT Mittens. Grr.

Gram, Gramps, and Ana came up the next day to pick up Ana, and Emma was quick to tell her, “Look, Ana! Mittens ate his vitamins!” (You’ve got to appreciate how well she remembers things, right?)

With Ana happy and no meltdowns over MORE moving casualties, I thought we were in the clear. That is, until I found the REAL Mittens buried deep in Ana’s closet. 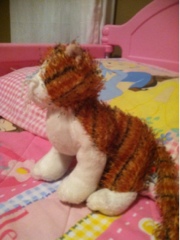 No worries, though, as this was a great source of hilarity for both girls when they came home. TWO Mittens, two different sizes! What fun! What excitement! What a week for Mommy!

Ana and Emma, I write all this to show you how much I love you and what lengths I went to over things like stuffed cats, just to keep you happy. Moving casualties are hard lessons that we all have to learn eventually, but I wanted to keep you from learning them this early on.

That said, hold onto your Mittens, because I’m pretty sure I couldn’t find yet ANOTHER one at all the Goodwills in all the world.