This week marks the halfway point on our marathon training schedule. Yes! Can you believe it?!

As November 11th draws ever closer and the temperatures here in Houston climb ever higher (who knew that was possible?!), the mileage keeps creeping up and up and up. I told Wes the other day that this is all mental. If I know I only have three miles on the schedule, I feel like dying after two miles… even though I don’t. If I know that I have seven miles to go, I would swear that I couldn’t run past six miles… which I do. In reality? I think I could probably go out and run 26.2 with only seven miles worth of murderous thoughts towards whoever talked me into running in the first place. And y’all? That is really saying something. Even though my brain says “no way!,” my body just keeps on moving. If this is possible for a non-athlete like me, it’s possible for anyone!

I say this at week fifteen, the halfway point, to encourage those of you who are out there training with us! I know when we originally signed up for the Rock n Roll San Antonio Marathon, we had quite a few people who said they were going for it, too. We haven’t kept up with everyone as diligently as I had hoped we would… but I hope you’re all still out there running!

If you’ve fallen behind or have just given up, let me encourage you to set a NEW goal. We’ve just signed up for the Cowtown Marathon, which will be taking place in Fort Worth on February 24, 2013. I’m super excited about this, as it’s my “hometown” marathon. (Well, technically, my hometown is Alvarado, twenty miles south of Fort Worth, but would you believe that Alvarado doesn’t host its own marathon? Word is, though, that we’re getting a Taco Bell, so we’re movin’ on up in the world!) Because this goal is a few months later than the San Antonio race, you have PLENTY of time to be ready for it. Honestly, I think you could start today and still be ready for San Antonio, but just in case that seems impossible, the Cowtown is another goal can you set for yourself.

As you look towards higher mileage in the weeks to come (we’ll be hitting the ten mile mark in the next few weeks — woo-hoo!), be encouraged as you remember that you’ve built up to those “impossible” numbers. So much of this IS mental, and your body, as you’ve increased slowly and consistently, is ready!

I watched an interview with US Olympic Marathon runner Desi Davila the other day, and she said that during her training season, she runs over two hundred miles a week. Holy cow! I don’t know about you, but hearing that taught me two things…

1) Mileage is relative to what your body is conditioned to. Two hundred miles a week for an Olympian is normal because they’ve conditioned themselves to it.

Be encouraged at this halfway point, friends. Even if you’re readjusting to a new goal, be committed today to seeing it through because YOU CAN DO IT! And if you’re in need of some inspiration, look at these pictures from two clueless idiots who decided that they were going to run a marathon before they could even run one mile. A training program WORKS, y’all, even for the clueless! 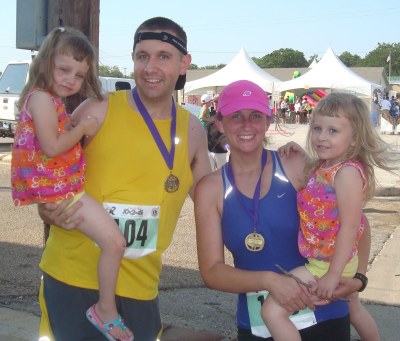 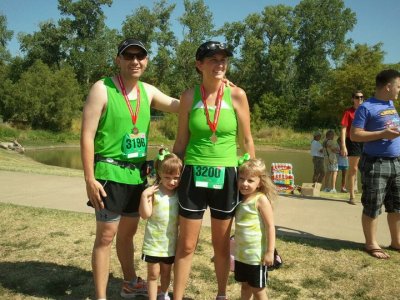 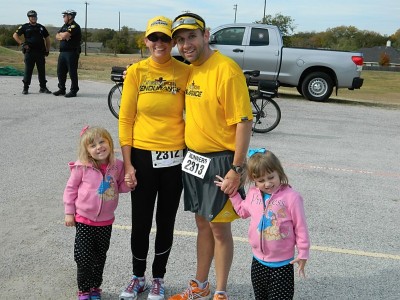 (If you’re shooting for a new goal and need or want some help in coming up with a schedule for it, I would be THRILLED to help you out with that. Or, if you’re shooting for a half marathon, a 10K, or even a 5K, please let me know if I can help you find a training program. I would LOVE to hear about you reaching your running goals!)