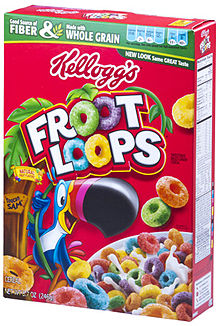 I am not looking forward to running 12 miles today. (I would say it’s because of the weather… but it’s really because I’m lazy. There. I said it.)

I ate half a box of the value sized Froot Loops in one sitting. (This has nothing to do with the first truth, but it certainly isn’t helping.)

I am dreading going back into the fray that is Wal Mart’s school supply aisle to pick up the one item we missed on the lists — a glue stick. (ONE glue stick! All that hysteria for ONE glue stick!)

I have two unpacked boxes left from the move. And I’ve just about decided that they’re probably not going to get unpacked because I have no idea where to put the stuff.

I am counting down the days until Disneyland… and then Walt Disney World. It’s a shame that I have to run in order to have a feasible reason to go (see my first brutal truth), but that’s a price I’m willing to pay.

I accidentally dropped my engagement ring into Charlie’s water bowl yesterday. TWICE. Am I losing all coordination or do I subconsciously want to increase Charlie’s value? (Because he would have so eaten that ring had I not grabbed it before he could lap it up.)

I have finally figured out our new finances now that we only own one home. Hallelujah! (It was confusing for a while there, but I think I’ve paid the last bill from the rent house, figured out the tax situation, and can actually visualize what our budget will now REALLY look like. I think.)

I’ve decided that paying all of our bills online is awesome… until my husband accidentally gets a credit card cancelled (which really wasn’t his fault), which creates all kinds of havoc. Just about got it straightened out now, but it took some doing!

I’ve discovered that when you run over dog poo with the lawn mower, the smell stays with you… because it’s all over the front wheel of the mower. Oh, well. What can you do?

I think the girls are ready for school and a break from each other. There. I’ve said it. I think Emma is all Ana-ed out, and Ana is all Emma-ed out. 24/7 all summer will do that to you.

Hope you all have a great weekend…