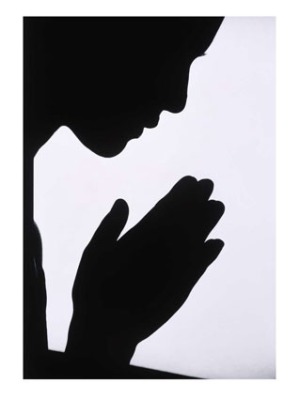 A few months ago, Wes got a call from a church member.

The girls and I were loaded up in the car, ready to go somewhere with him on his day off. While I know that there are no “days off” when you’re a pastor and while I know that the grace of God in my own life should be enough to make me react in a godly way to these things… well, I still got annoyed as he talked for a long time on the phone while the girls began behaving like chimpanzees on a caffeine high in our hot, hot car.

I considered honking the horn at him as he finished up the call, but I stopped myself when he lowered his head and closed his eyes. A few minutes later, he looked up again, got in the car, and started to drive.

“Someone was having a problem,” he said.

He looked at me like I was an idiot. (Guilty as charged in this instance, probably.) “I told them I’d pray for them. So I just prayed for them.”

And so began a discussion, about how we always say we’re going to pray for someone and we always intend to pray for someone… but then we forget. If we believe that God really hears and desires our prayers, then we would do well to make it a priority and to pray in any and all occasions, especially the ones where people ask for you to pray. So, instead of saying, “I’ll pray for you,” Wes always says, “I’ll pray for you right now.” He told me that he gets the strangest reactions when he hears a prayer request from someone and says, “Can we pray right now?” It’s like they’re surprised to hear that he’s actually going to pray, like, right that minute. Actually praying — what a concept!

And that? That change in me, that will make me more inclined to just pray already? Well, I just prayed that God would work that out in me.

Really. I just prayed that!