I’m going to share a fun story with you. I wrote the following blog post on March 30, 2011, nineteen months ago… 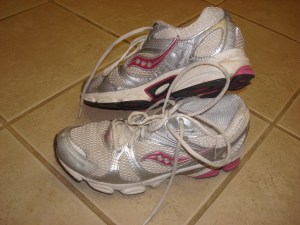 A long, long time ago, I was going to run a marathon.

I was running every day, increasing my distance and shortening my time, calculating what I would need to accomplish to run the Cowtown in Fort Worth… and then, I met Wes, and suddenly, a good portion of my running time was better spent sitting around together talking for hours and hours and hours. Ahem.

And then? Well, then, there were so many classes and so much working and wedding planning that I was lucky to get in a two mile run a day. And THEN there was a move overseas with a baby and then ANOTHER baby, and running was less about reaching a goal and more about losing baby weight and keeping it off as I reached thirty and my metabolism took a permanent vacation.

I’ve had no goal in running, nothing to shoot for, since 2003. And I’ve been okay with that. Kinda. Sure, I felt like there could be more when I heard that my college roommate was running her TWENTIETH marathon, but that envy and admiration was nothing that a Twinkie or two (or a whole dozen!) couldn’t cure. I was okay with what I was doing… which wasn’t much.

Then, I picked up The Me Project. I knew I was in trouble when Kathi wrote that I needed to write down some of my goals and the only goal that kept coming to mind was, “run a marathon.” Wes and I were in the midst of a long winter’s nap when it came to running, and the thought of running just one mile seemed ludicrous. 26.2 miles?! HA! I put that goal aside and decided to pretend like I had never even thought of it.

I was doing a good job of that until Wes went to the doctor and discovered that his blood pressure was just a wee bit high. Okay, “wee bit high” was more like “alarmingly high,” and his solution was to run like a mad man. He wasn’t content with just picking up the daily jogging habit, though — he started looking into competitive running. And then, he started looking at me. What? My blood pressure is just fine, thankyouverymuch!

Long story short, he bought me a super nice double jogging stroller, some new workout clothes (to replace the pair of running shorts I’ve had since I was fifteen that now have holes in the butt — I know), and suggested that it would be easier to train if he had someone to train alongside. And let’s face it, y’all. I sure could use some exercise now and then, right?

So, we began two weeks ago. And I was convinced after a quarter mile that there would be no marathons in my future. No 10Ks. And a 5K? As if! But after running every day, I was shocked to find that after just a week, I was running two and a half miles without too much exertion. Could it be that I might just possibly be able to do this crazy thing?

The jury is still out on that one, but we have a goal. Right now, we’re planning on running a half marathon in 2012. And by typing this out for the whole world to see, I’m committing myself to seeing it through. My body is groaning at the mere suggestion of doing this, but after only two weeks of running just a couple of miles, Wes has normal blood pressure again. He’s going to be like the Bionic Man once we get up to thirteen miles, y’all!

Our plan, when I wrote that, was to run a half marathon in 2012. The half marathon we had in the back of our minds was the Walt Disney World Wine and Dine Half Marathon, which was held this past weekend. We figured it would honestly take us that much time to be ready to run 13.1 miles.

Had you told me, back when I first wrote this, that my goal date would be accurate but that my expectations would be woefully inaccurate, I wouldn’t have believed you. I would have been blown away to hear what we’re doing now.

I post this just to encourage you, no matter where you are or what your goal/expectations are for yourself that even the craziest things are totally and completely possible.

Trying to remember this in ALL areas of my life…

One thought on “Goals and Expectations”