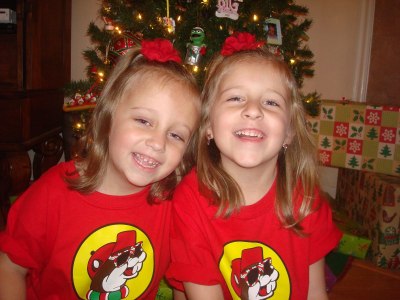 Some funnies to finish off the semester…

Me to Em, “What does it mean for Jesus to be your shepherd?” Em to me, “It means He bees your boss.” That bees a great answer.

Emma to me, “Ana keeps starching at me.” Pretty sure she meant “staring,” but “starching” sounds even worse.

Ana to me, on Pearl Harbor Day, “Today is an important day in America. Back when we wanted our freedom, we had to fight a big battle with Japan. And because of Abraham Lincoln, everyone could now be free, even Japanese people like Emma.” Well, there you go.

Emma to Gram, “We did a dance… Ana what was that dance called?” Ana to Emma, “The Cha Cha Slam!” Emma to Gram, “That’s right! The Chocolate Slam!” Sounds delicious!

When asked where Wes should take me for our anniversary, Ana, “McDonald’s!” Emma, “Chuck E. Cheese!” Would you believe that they were BOTH wrong?

Hope your Wednesday is going well…