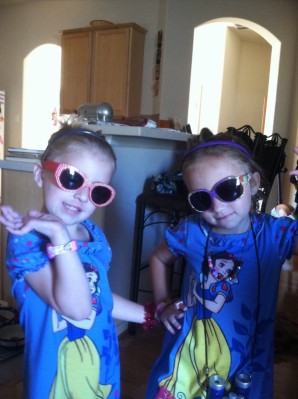 A few Faulkette funnies from the holiday season…

– Ana to Emma, regarding when it’s okay to kiss a boy, “You have to wait until the preacher tells you to at the wedding.” Wow, someone has been getting their intel from Papi.

– Emma to me, “I’m a nice girl, because I have never gotten coal for Christmas.” There’s a good standard by which to judge your behavior.

– Ana to me, “If you keep eating those cookies, you’re going to get the flu.” Sure won’t, but thanks for trying to be my calorie counter, ya pint-sized diva.

– Emma to Ana, “You remember the time you said I had blood on my nose, and I picked it and ate it, and it was actually salsa?” Ana to Emma, “Oh, yeah, I remember that.” I’m proud to say that I don’t remember this, which means that I was spared the ick factor when it originally happened. Bleh.

– Ana to me, regarding her ice cream, “It’s nice, with a ribbon of caramel right through the middle.” Someone has been watching too much Food Network.

– Emma to me, regarding mistletoe, “I asked (name of a little boy in her class) if I could kiss him. And he said that would be okay. So, I did!” Someone has NOT been getting their intel from Papi.

– Ana to Emma, “Oh, there’s just a blush of stars out tonight!” And before I could wonder what that meant, Emma to Ana, “Yeah, there sure is A LOT!” Thanks for the translation, Emma.

– Ana to me, regarding what she learned from Wes’s Wednesday night sermon, “You shouldn’t marry two wives, because you’ll like one better than the other, then you’ll like her kids better than the others, and they’ll all fight. And that will be bad.” My six year old can figure out what the patriarchs of the Bible never could, y’all. Gotta love that.

– Emma to me, “I wish I was an elf.” Me to Emma, “Why is that?” Emma to me, “So I could hide and watch people!” Thank you, Elf on the Shelf, for encouraging my children to be stalkers.

– Ana to me, “In Israel, they don’t celebrate Christmas. They celebrate Huh-wok-uh-nuh.” Well, unless they’re Muslim, then they celebrate Rah-muh-duh-dawn.

– Emma to me, on the meaning of Christmas, “Oh, it’s about Santa and mistletoe and candy and God’s birthday!” Well, I’m glad God was shoved into the end of the explanation, at least.

– Best Advent moment of the year was when Wes read a passage from Isaiah about Jesus, then Ana threw her arms in the air and started singing, “Emmanuel! His name is called — Emmanuel!” To which Emma responded, “Yeah, that’s where they got MY name from.” LOVE this age!

– Ana to Emma, “Sit like a lady, with your legs crossed.” When Emma wouldn’t, Ana to Emma, “Fine. You can be a lady when you’re in the first grade.” Just as long as she gets there eventually, I guess.

-Emma to Ana, “I want a monster truck!” Ana to Emma, “You need to get a job first.” Ana Faulk — realist and dream killer.

– Wes to the girls, while playing a travel game that’s kind of like Twenty Questions, “I’m thinking of…” Ana to Wes, “Mommy’s kisses!” Well, he does spend a lot of time thinking about those, you know.