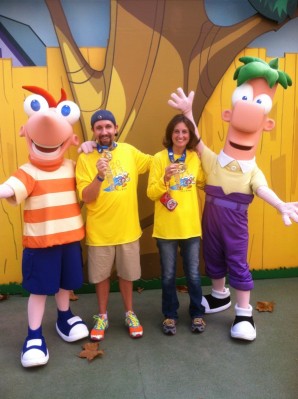 Today we ran the Walt Disney World Half Marathon.

This was the first half of the Goofy Challenge. Today’s race was “the Donald” – a 13.1 run through the Magic Kingdom and Epcot. Tomorrow’s race (the second half of the challenge) is “the Mickey” – a 26.2 run through all four WDW parks.

Clear as mud? Okay, then.

The morning started out EARLY with a three o’clock bus ride to the starting line. Even with the early start, the crowds were so big that we just barely made it to our corral before the start. Yikes!

Once we started running, it was all fun and games… until mile four when I stepped into the grass outside of the Magic Kingdom and kicked off my tutu. Probably gave everyone else on the course a real thrill to see me strip down to my leggings, but I was done with the itching and the slow creep of tulle up towards my armpits, folks. Never again will I attempt to run in costume!

After a jaunt through the Magic Kingdom, it was back down to Epcot. It was a quick run, y’all. Not that we were exceptionally fast or anything, but when your only WDW race experience is the full marathon, anything else looks like a walk in the parks. Literally. Except with running, obviously.

All in all? So much fun and a great warmup for tomorrow. Can’t wait!