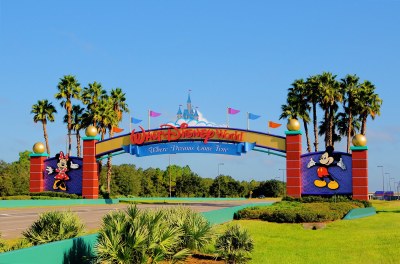 We began our Walt Disney World Marathon weekend… on Thursday. Which, you know, isn’t technically the weekend.

But it was close enough for us! We got up early that morning and took the girls to school. I know what you’re thinking — how in the world could we go to Walt Disney World and leave our children behind?! It was easier than you would think, thanks to Wes’s mom, who came into town to watch them for the week. (I kid, of course. I was plagued by guilt for a good long while about it but finally told myself that this trip was only for those who were willing to run 39.3 miles. Which Ana and Emma were not willing to do, of course.)

After we dropped the girls off, we headed to the airport, where we caught a plane to New Orleans. Our fabulous Houston weather delayed take-off and had us arriving in New Orleans behind schedule, but thanks to the equally fabulous weather they were having there, our flight to Orlando was also delayed. We didn’t discover this until we had already run through the airport in a frantic uproar, so we started putting mileage on our feet long before the start of the first race. This mad dash was also our opportunity to acquaint ourselves with several other people heading towards marathon weekend, who had a similar sprint through the airport themselves. And that’s always fun.

We were delighted to find that Orlando wasn’t experiencing any weird weather at all (hooray!) and even more delighted to find that the Magical Express line for our hotel was short and quick moving. Wes and I were all about saving the dollars on this trip, which meant that we only considered value resorts when picking our hotel. (Actually, that’s true of us all the time. We’re cheap, y’all. What can I say?) Thanks to my Mommy Guilt, I picked a hotel that I knew the girls wouldn’t be sad to miss out on, which is how we ended up at All Star Sports. We stayed at All Star Movies in 2009, and this? Was pretty much the same, except, you know, sports-themed. It was a big hit for marathon weekend, though, what with the way “Eye of the Tiger” and that theme song from Chariots of Fire were constantly playing in the food court. For real, y’all.

On the drive to the hotel, we heard the bus driver talking to another bus driver through their system, telling him that he had to make drop offs at “Stars and Corn” — ie, Coronado Springs and the All Star Resorts. I kept going back to this every time we waited on a bus, until Wes started calling our hotel the Corny Stars Hotel. Which, it was, given the music selections.

After we unpacked at the Corny Stars Hotel, it was time to head to the Marathon Expo at ESPN’s Wide World of Sports. This expo would be better be called “mass hysteria” as it is overcrowded with shiny, happy people, the great majority of whom are women buying blinged out running accessories. (I can only imagine what the Princess Half Marathon weekend is like.) Wes and I got through packet pick-up without killing anyone or getting killed ourselves, and then, since we were feeling lucky, we also braved the merchandise arena. It was here that Wes braved the crowds even further and got in line to get a marathon edition Dooney and Bourke purse for me. And because he went through all that trouble? I, of course, didn’t refuse his gift when he presented it to me. (He’s awesome, isn’t he?)

Because we’re Disney dorks, we had this trip planned out to the very last detail months ago, and we knew beforehand that the only park we wouldn’t be visiting as park goers (although we would run through it as part of the marathon course) was the Animal Kingdom. So instead of heading back to our hotel for dinner, we hopped a bus to the Animal Kingdom Lodge for dinner at their quick service restaurant and sat out in the area that overlooks where some of the AK animals roam and graze. Just trying to get our Animal Kingdom fix, you know. It was dark by the time we got there, but we were still able to see some zebras.

We took a bus to Epcot, where we made the switch to the Corny Stars bus (it will never be All Stars again, y’all!), and arrived back at the hotel with plenty of time to rest up for an early morning.

Up next… the Magic Kingdom is a whole lot easier to conquer when you don’t have any children! But it’s slightly less magical. So, you take the good with the bad.