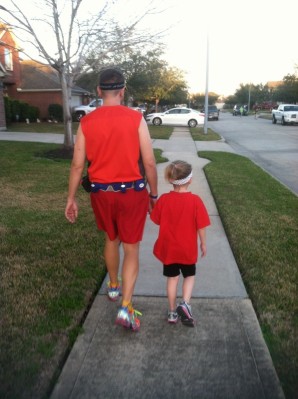 Remember back when I said we were going to run four marathons in six months? Yeah, that was a really dumb idea. (EDIT: And Wes tells me that it was actually four and a half marathons in four and a half months. Which was an even dumber idea.) But the good news? Is that we’re three marathons into that little experiment and have JUST ONE MORE TO GO! (This season, that is.)

For those who are wondering, we’re about four weeks out from the last races of the season. RaceS, you say? You mean, you and Wes are running two different races? Yes, we are! One of the challenges of running these marathons is that a great many of them are scheduled for Sundays, which, you know, doesn’t work so well for you if you’re a pastor. We hadn’t counted on running at Disney when we signed ourselves up for the Cowtown, so to save himself a Sunday this early in the year, Wes has decided instead to run the Surfside Marathon, which is on a Saturday and is closer to home.

As for me? I’m still going to be running the Cowtown. Which, if you remember, was the marathon I originally dreamt of running way back in 2003 when I first thought it might be a grand plan to train for one. It’s been ten years, three moves between three continents, and two children since then, but I’M FINALLY GOING TO DO IT.

(And I’ll get back to the Disney recaps soon…)