And on with the Disney recaps…

We began our first day post-marathon with a colossal mistake.

Wes looked up park opening times the night before at the hotel, and we were delighted to find that Epcot was having extra magic hours on the morning we were planning on being there. This was great news, as we had big plans to go straight to Test Track, which has recently reopened after being majorly refurbished and re-themed. “Refurbished and re-themed” at Walt Disney World means “two hour wait times,” and that’s even on rides that weren’t even that popular in the first place. So, Test Track? Would have an insanely long line during normal hours. We were super excited that we’d get in an hour early with other resort guests, and we got there at 8am, right in time for extra magic hours… and were pretty much the only people anywhere near the park.

Oops. We had been misinformed on the extra magic hours. It happens.

After a decidedly un-magical hour of sitting outside of Epcot and paying ten bucks for a cookie, a Coke, and a coffee (breakfast of champions, y’all), we were the first in line for the opening of Epcot. As planned, we headed straight towards Test Track, where we were the first on after cast members took a ride through to check that everything was working as it should. And everything was working just as it should, with some great improvements on the ride… up until it completely stopped, trapping us in a car in the dark with crazy, Tron-themed music blaring all around us. Since we were in a car with other people, I refrained from the default smooching to get the ride going again, and as a result, we sat there for probably fifteen minutes. It wouldn’t be a day at Epcot for the Faulks unless this happened, though, so we just sat back and relaxed.

Eventually, the ride started going again. Woo! And even with the random delay, it was still way better than Test Track has ever been in the past. Awesome!

We went over to Soarin’ afterwards and were able to get Fast Passes AND walk on to a nearly empty stand-by line. After riding it once, we ate a real breakfast and people watched inside Sunshine Seasons. During marathon weekend, the runners of the different races are given technical shirts and, of course, medals upon finishing their races. Most people wear one or both in the park over the next few days, so there was no shortage of shirts and bling out and about at Epcot that morning. Sunshine Seasons is one of the few places in Epcot with huge staircases, and we got a kick out of watching the various runners manage those stairs. Plenty of marathon runners were going down sideways and backwards (because it’s easier that way for some reason), half marathon runners were still looking a little stiff, and the great majority of the Goofy runners were just barreling down with looks of horror on their faces. We were still hurting, too, but we congratulated ourselves on not looking nearly as ruined as some of these folks. Walking all over the Magic Kingdom the night before? Had really helped. File that under “what to do after you’ve run 39.3 miles,” y’all. Go to Walt Disney World and just walk all over the place!

After another ride on Soarin’, we rode Figment’s ride with the largest group of senior adult travelers I’ve ever seen at any Disney park. Hmm. They were moving better than most marathon runners that day, so kudos to them. We crossed Future World to ride/watch Universe of Energy, which is one that I don’t remember ever riding as an adult. I’m not even sure if they had it when I was a kid and visited Epcot in 1986. It wasn’t all that thrilling, so I can’t say that I missed out if they didn’t. Eh.

With Future World wrapped up (I just couldn’t do Nemo without the girls — it would have been the ultimate betrayal), we walked back towards the World Showcase, stopping to pick up phones for the Agent P World Showcase Adventure. This was previously a Kim Possible themed game, and it involved searching for interactive clues in the World Showcase using cell phones. Pretty cool, actually. We’d never done it before because our girls were so small and we weren’t into Kim Possible, but now that it was about Perry the Platypus? We were totally there. With Major Monogram giving us our first assignment as we went, we headed towards Mexico and completed our assignment there. Much to our delight, we were able to make things in the Mexico pavilion move and make sounds by pressing buttons on the phone, which delighted people around us who had no idea who was making Perry appear out of nowhere, making the guitar in the shop play, and even making the volcano at the restaurant erupt. AWESOME. (This would happen in the other countries as well. GREAT game, y’all!) We took some time out of our secret agent work to ride the Three Caballeros and eat lunch at the restaurant on the water…

… which made our phone stop working. What gives, Walt Disney World? Can a secret agent not eat?! We headed to Norway to pick up a new phone and were told that, no, a secret agent cannot eat during this game. Well, there you go.

We rode Maelstrom in Norway before getting back to the game, and while we were playing, we stopped in at the souvenir shop there to get Ana this hat… 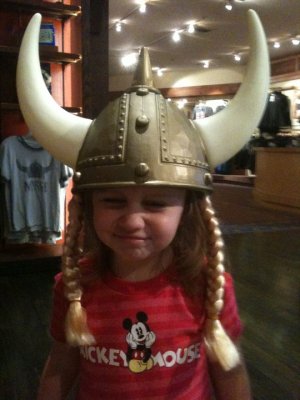 That picture is from our 2011 vacation when we failed to buy this hat for Ana. She has never forgotten our mistake and requested that we pick it up for her this year. Which we did. So happy that our little Viking was finally able to get her hat!

Our Agent P adventure took us through the entire World Showcase (where we did make an additional stop for chocolate caramel in Germany, of course) and on into the sunset, literally. We’ve never spent so much time in that part of Epcot, and we’ve never explored each of the countries so deeply. If this is Disney’s way of getting people into souvenir shops and restaurants, all in an effort to encourage them to spend more money — WELL DONE, Disney. We felt like we had seen everything by the time we dropped off our phone and walked back to Future World. We picked Emma up a Duffy Bear purse (her request) at the Duffy Bear shop, went over to the Mouse Gear shop, and took a ride on Spaceship Earth.

From there, we debated taking the monorail to one of the fancier hotels for dinner, but our feet were killing us. So, it was back to Corny Stars for dinner and (sniff, sniff) packing our bags.

Just one more day of Disney! Why had I spent majority of this vacation running?!