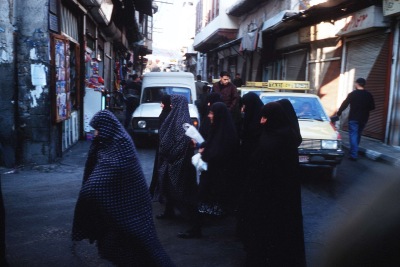 I spent the summer of 2004 in Lebanon.  Now, I was in a very contemporary part of Beirut, which wasn’t as conservative in terms of religion and culture as the great majority of the Middle East, but it was still, as you would imagine, different than the United States.  It was like a study in contrasts a lot of the time, between more modern and “progressive” trends and more traditional and ancient ones, all of them mixing and meshing together in the city.

And the contrasts were never clearer than when it came to women and the way they dressed.

It was my great fortune to meet and spend some time with some ladies that summer who dressed this way.  Their husbands, in quite a progressive move themselves, had no problem with their wives visiting with strange American women, so I got to visit some of them in their homes.

And let me tell you.  Under those burkas?  Were some crazy, wild, young women.

There were the ones who were into belly dancing.  (I kid you not.)  Then, there were others who spent a good portion of their time trying out a rainbow assortment of different hair colors.  And the good majority of them were very focused on staying trim and in shape… even though they were completely covered up from head to foot.  And they were happy.  Simply delighted and thrilled to remain uncovered at home then to put it all back on as soon as they crossed their thresholds.

This seemed odd to us, even as conservative Christian women.  We weren’t that far removed from post 9-11 and information about the Taliban and all the atrocities that women were facing in a similar culture.  Weren’t these ladies sick and tired of being put down by “the man”?  Weren’t they ready to burn their burkas just as vehemently as the generation above us had burned their bras in the sixties?  Weren’t they modern and enlightened enough to say “enough is enough” already?

Not so much.  When we asked them how they felt about never being seen, they looked at us, like we were the crazy ones, and said, “But this is all just for my husband.”  And then, they’d giggle like the young, deliriously happy newlywed women that they were.

(And incidentally enough?  Their young husbands were pretty happy themselves.  And why not?  Their women were modestly dressed out and about, then went home and belly danced for their men.  Win, win.)

We all went back to our own rooms on those nights, shaking our heads at how beaten down and trodden those ladies were… but it got me to thinking.  Maybe WE have it wrong.  When I look at Facebook and see pictures of young women who are barely of age striking seductive poses while half dressed, I wonder at how “enlightened” we really are.  When our culture “exalts” women by reducing their value to nothing but their sexual appeal, I wonder at how backwards we have it.  And when we, as believing Christians, fall into the trap of saying that valuing femininity and womanhood equals the freedom to flaunt ourselves in a way that dishonors Christ and harms our brothers, I wonder at how far we’ve strayed from Biblical truth.

Now, I’m not suggesting that we all start wearing burkas.  But I’m suggesting that maybe we should regard our bodies and the way we present ourselves with some discernment, knowing that we live to honor God and that modesty still has a place in our society today.  And while I’m not suggesting that these unbelieving men in Lebanon had the best of intentions or the right motivations for being so adamant about preserving their wives’ modesty, I have to tell you that I think they’re WAY closer to what’s healthy than some American men who seem to rejoice when other men visually devour their women.

We live in a messed up world, especially when it comes to how we’ve redefined women’s liberation and what that should look like.  Praying for better discernment as I raise my own daughters to respect themselves and who they are in Christ, despite what our culture tells them they should be.

2 thoughts on “Feminism and Modesty”