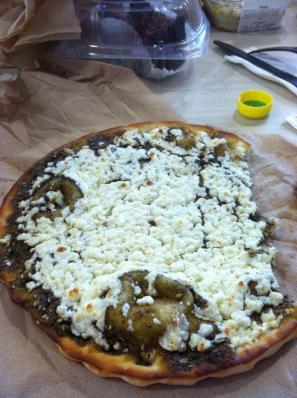 And the recap of the SBC continues!

Monday morning came early, and we were super excited to get back to the convention center.  Navigating around downtown is different on a weekday morning than it is on an evening (which is when we usually have occasion to be down there, thanks to Rockets games), and you really need to applaud me for not freaking completely out in I-45 traffic during Monday morning rush hour.  (I would save that for Tuesday morning.  Seriously.  I would.)

Once we got to the convention center, we parted ways for our different conferences.  I spent the next few hours in the coldest room on earth, where probably a few hundred other pastors’ wives were gathered to hear some incredible speakers.  As you would imagine, the first speaker spoke on marriage and how we can best support our husbands as we minister alongside them.  I appreciate hearing these admonitions and encouragements, no matter how many times I’ve heard them before because they’re always spot on. And I appreciated this speaker even more than most, as she came right out and told us that we need to have lots of sex with our husbands because “you’re the only one who can morally meet that need for him.”  Truth, sister.  And the fact that she was well into her seventies and proclaimed proudly that she still practices what she preaches?  Well, there you go.  Bet you didn’t know that kind of talk was going on at the Southern Baptist Convention, huh?  God’s all for it, friends.  He really is.

I was super excited to hear the second speaker, who I knew from my days as a children’s minister at the church where her husband was serving as the student minister.  They’ve since moved on to a really great ministry in Austin, and she’s blossomed into this incredible writer/speaker for women’s ministry.  Just as I was marveling at how small the world really is, I got a text from Wes, telling me to sneak out early because he’d happened upon all the Oklahoma pastors and they were on the hunt for Chinese food.  Huh?  Actually, I wasn’t all that surprised by the fact that in a convention center full of thousands of people that Wes would somehow find his associational buddies, just like he had last year in New Orleans. I left the session a little earlier than planned and was glad to get to see everyone again.  We walked them over to Kim Son… after getting turned around a couple of times.   Seriously, don’t trust the Faulks to navigate for you.  Even in the shady neighborhoods our directional deficiency led us into, we were confident that we were safe because these pastors are from places in Oklahoma where you make your own diesel fuel, eat only meat that you kill yourself, and most definitely pack heat.  We were going to be just fine, even in the ghetto!

After lunch, we headed back into the convention center for the afternoon sessions.  More encouraging speakers, more challenging topics, and best of all, submission of motions for the business meetings from several of our crazy cousins.  Friends, THIS is why we go to the SBC.  I appreciate that every church has a voice in the convention and that even the nuttiest, most bizarre motions (and the pastors that bring them) are taken into consideration.  (And I love reading the tweets that roll in as it happens.  The only thing better about an infamous pastor making motions is reading all the other pastors’ responses to him.  My phone’s battery was dead mid-afternoon.  They were THAT funny!)

Just as it was getting hard to pay attention, we broke for dinner.  You can count on the SBC keeping to the schedule when it comes to breaks for eating.  Hallelujah!  Wes and I began walking downtown, searching for delicious places to eat… and were shocked to find that most of downtown Houston shuts down at 5pm.  Sharp.  Last year, things weren’t even getting started in New Orleans until 9pm, so we were really at a loss here.  We finally happened on a little supermarket called Phoenicia, where we figured we could at least get a manakish or something.

It was better than we could have hoped.

Shawarma, kebobs, hummus, tabbouleh, and loads and loads of zaatar… we were transported back to Lebanon, 2004, our bags full of injils, and Arabic phrases on our lips.  So, so good, y’all!

Then, it was back to the convention center and back on the road, where we agreed that the SBC?  Is a lot more fun when it doesn’t involve driving in rush hour both ways.