Can’t believe my sweet bear is six!  (And I can’t believe her hair still looked that high even after she slept on it.  That Bibbidi Bobbidi Boutique hairspray is something else.)

We got up, got ready, and got on the bus to Epcot, where we had Extra Magic Hours waiting for us.  Woo-hoo!  Wes put Em on his shoulders, and Ana and I followed behind them as Emmy proclaimed to everyone around her that it was HER BIRTHDAY.  We should all get to celebrate our birthdays at Walt Disney World, y’all.  So fun!

We hit Soarin’ first, then headed over to Test Track.  Emma is fearless when it comes to the big rides (unless they’re in the dark), but Ana is about as fearful as they come.  So, she was my buddy that morning, and she stuck especially tight to me as we got ready to ride the “really fast cars.”  We had two teenage brothers in the car with us, and as we all climbed in, one of them told Ana, “Your hair sure does look pretty.”  (She still had her huge red hair on, of course.)  People, she’s only seven, but you’re apparently never too young to positively glow in the light of a cute boy’s attention and his use of the word “pretty.”  All of Ana’s apprehension went flip flying out the window in light of this, and she spent the rest of the ride stealing glances at this boy.  He totally caught her doing it, too, and kept smiling at her.  Oh, my.

When we finished the ride, Ana was practically jubilant (for obvious reasons, ahem), and Em was… well, a little subdued.  Ana proclaimed she was brave enough for Mission Space, so we headed that way, where we launched into space, orbited the moon, and very nearly crash-landed on Mars.  We left our simulator with Ana screeching about how awesome the ride was and with Emma telling me, “I don’t feel so good.”  Our plan had been to leave Epcot after the Extra Magic Hour and head over to Animal Kingdom for a birthday brunch at Tusker House then a day in the park.  All Emma’s choice.  We asked Emma what she wanted to do now that she felt sick, and she said she still wanted to see the animals…

… so on we went, hoping she’d feel better.  All through brunch (which included Krispy Kreme donuts — where have you been all my life, Tusker House?!), she continued to look worse and worse as she picked at her food, barely looked at the characters who came by to meet her, and just exuded bleeeeehhhh. 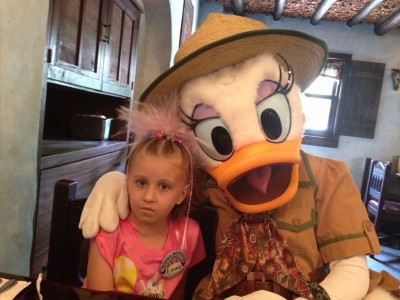 See?  Just doesn’t look like the Emmy we’ve all come to know and love, does she?

We went on to Kilimanjaro Safaris, hoping for a turnaround, and I kid you not, as soon as we pulled out of the station, Em looked at me with an expression that clearly read “I’m about to spew!”  Before she could open her mouth to do so, I grabbed my jacket from around my waist, held it to her mouth with one hand and gestured to Wes with the other hand, mouthing “give me your cup!” as I did so.  Quick action led to an astonishing amount of vomit being quietly and inconspicuously dealt with, even as I gathered my puking child close and tried to keep anyone else from seeing, knowing that sometimes these things set off a chain reaction with other people.  And that would have made for the worst shift that safari driver could have ever had, y’all.  Em did her worst to my jacket and Wes’s cup, all while watching the animals on the safari ride (lol!), and once she was finished, I took one of our rain ponchos, bundled it all up, and tied off the plastic so we were left with a compact package of gore and gloom.  Thank you, chocolate-covered cheese!

Em crawled into my lap and fell asleep, leaving me to pass along the package to Wes… who THREW IT AWAY as soon as we got off the ride.  Yes, he threw away my jacket.  I told him later that there were washing machines back at the hotel, but he didn’t think it was worth the effort.  To his credit, though, he spent the whole walk from the safari to the entrance to Africa praising my worth as a vomit catcher. If I had sons, I would advise them to put this “vomit catching” skill at the top of their list of attributes to look for in a girl before marrying her.  Sure, she’s smart, accomplished, and looks good, but can she catch ten pounds of vomit on a ride at Walt Disney World without anyone else ever knowing that puke has graced them with its presence?

If she can, you better put a ring on that, son.  (This is why God has not given me sons.)

Anyway, my skills were about to get an even greater test as I told Wes to enjoy the park with Ana while I took Emma back to the room to sleep off the sick.  Getting her back to the room involved carrying her dead weight across the Animal Kingdom then down to the buses.  That’s no short walk, y’all, and once again, I was cursing myself (and Wes, mainly Wes) for having left the strollers in Texas.  Along the way, I kept reminding myself that the last time I was in Animal Kingdom, I was at mile seventeen of the WDW marathon and must have certainly been feeling much, much worse… then I would tell myself that, no, carrying a nearly comatose six year old with vomit breath (which she was aiming right into my mouth, thanks to the angle at which she passed out in my arms) in the summer heat in Florida had to be worse.  (It’s a toss-up, really.)

Once we got on the bus, I was completely drenched in sweat, and Emma, glory, woke up and said, “What happened?”

“You puked everywhere,” I said. “Do you not remember that?”

“Hmm,” she said, tapping her chin with her little finger.  “Nope.”

“And I carried you,” I said.  “I carried you all over the Animal Kingdom.  Do you remember that?”

I sighed… and just went with it.  “As soon as we get back to the hotel.”

So as soon as we got there, we went to the food court and got Emma a fruit bowl and a bottle of water… which she finished off at an alarming pace.  She and I sat in the rockers facing the little creek at the resort, waiting to make sure the fruit stayed down, while I got updates and texts from Wes and Ana, who were enjoying themselves at Animal Kingdom.

Yep, I got Princess Puke, and Wes got the Animal Kingdom.  Grr.

Whatever, though.  I had plenty of good conversation with the birthday girl that afternoon as we rocked and watched the water, and by that, I mean that I sat there listening to her as she talked my ear off, obviously feeling loads better.

She continued chatting when we were reunited at the resort with Ana and Wes, and I told Emma after dinner that I would take her back to the Animal Kingdom so she could enjoy what was left of her birthday.  She told me she’d rather go to the Magic Kingdom, and so, she and I got on the bus and headed that way while Wes and Ana went swimming at the pool since Ana was too worn out to go back to the parks. 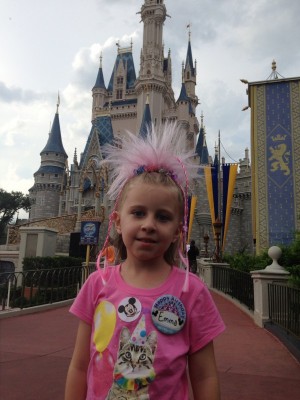 We hit up Em’s favorites, including Small World, the carousel, Ariel’s ride, and, of course, the Tiki Room.  I had my Tiki Room T-shirt on, much to Emma’s delight, and we skipped into the show together, holding hands and laughing.  I’m telling you now that every ounce of puke that’s been thrown my way since becoming a mother was more than worth it for even just a few moments of sitting there watching sweet, sweet Emmy delight in those singing birds, as she clapped her hands and sang along with them.  How dumb is it that I spent the better part of that show, wiping away tears, thinking about how shocked and scared I was all those years ago, holding a newborn in my arms and watching a pregnancy test turn positive?  I know I spent more than a few moments back then wondering why God had given us Emma when we had no idea what we were doing with Ana (we still don’t!), but I’m telling you that every moment she’s been with us has been a testimony of God’s unexpected grace and favor. She sat there making Tiki bird puppets with her hands, giggling with pure delight, and snuggling up to me, sighing so contentedly, and I just cried and cried.  Sweet, sweet Emmy.  I love you SO much!

And now, I’m crying again.  Sorry.  I’m still a little broken up over the fact that Wes threw away my jacket.  Thanks a lot, Preacher!

Up next… Hollywood Studios!