The next day dawned early and bright.

And at this point in the vacation?  We all looked a little like this…

You can feel the exhaustion, can’t you?  But we were determined to not waste a single minute, so I dragged their lazy bums right out of bed, threw some clothes on them, and marched them down to the food court so Papi could reload with some coffee.  In no time at all, they were looking like this… 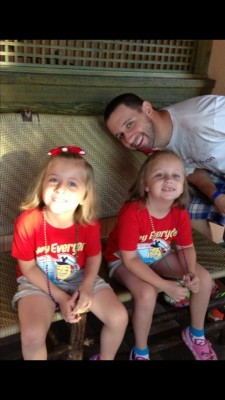 TOTALLY ready for a day in the parks!

What park we were ready for was up for question, though.  We had dinner reservations for that evening, but we were free to go anywhere that morning and afternoon.  Since we’d been to all the parks, we asked the girls where they wanted to go, expecting for them to say Magic Kingdom.  Imagine our surprise when they said Epcot!

And what great weather we had for it, huh?

We started at Soarin’, which put us right by Living with the Land just as the cast members were coming out and begging people to get in line and ride it.  “Seriously, will someone, anyone ride this horrible ride?!”  (They didn’t really say that.  But you could read it in their bored expressions!)

Ana LOVES Living with the Land, and she succeeded in dragging us on it.  Ughhhhh.  I’m not sure who was more bored — us or Emma, who had to endure listening to Ana read every sign along the ride.  “Look at that, Emma!  Okinawan spinach!  Just like you!”  Zzzzz…

After those ten minutes of our lives that we’ll never, ever get back, we hit up the Nemo pavilion then went over to ride the Figment ride and play all the games they have there.  I had a flashback to our first visit in 2009 while we were there… 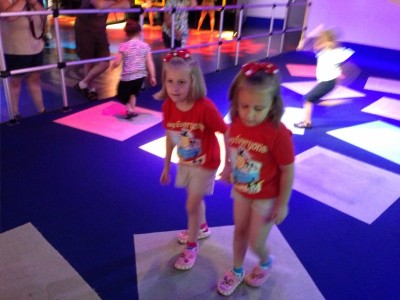 They’ve grown up so much!  Just takes my breath away…

By this point, we were ready for lunch.  We headed over to the Electric Umbrella and chowed down while Ana and Emma sat next to the window facing Mouse Gear and waved to random strangers… most of whom waved right back!  Everyone’s happier at Disney.  It’s a proven fact.

From there, we went on to the World Showcase, stopping just outside of Future World to pick up a phone for an Agent P adventure.  Once we got to the Mexico pavilion… eh.  The adventure just wasn’t working like it should have.  I think this might have had something to do with the large number of other people attempting to do it.  Despite this, we went on the Three Caballeros rides, met Mexico Donald, and started our Duffy signs (the Faulkettes require stamps in ALL the countries, you know), and said we’d try again in Norway.

It didn’t work so well there either.

We gave up on the adventure (lol!) and just settled for enjoying the World Showcase.  The girls had never ridden Maelstrom before, and they declared it a favorite, followed closely by the short film we watched later on Norway.  After the movie was over, the girls told us that Norway a) has polar bears and b) has talking trees.  I think this had more to do with the ride than the movie, but this was just the beginning of us learning a whole wealth of information about the world.  Included in the information overload were these gems…

China — “Parts of China have snow for almost the whole year!”  and “China is big.”
Germany — “They like chocolate in Germany.”  “Boys dress like Pinocchio in Germany.”
Italy — “They eat spaghetti.”
Japan — “Hey!  Emma is Japanese!”
France — “They speak French in France.”  “Everyone is in love in Paris.”
Canada — “It’s cold in Canada.”  “It snows in Canada.”

I think they hit all the high points, right?

Oh, and that point about Germany and boys dressing like Pinocchio?  Spot on.  I mentioned it earlier, but I’ll say it again here — some Disney cast member costumes are superior to others.  Take, for instance, the new Dumbo cast member costumes which are retro-tastic and super cute.

Seriously, I would work at Storybook Circus just to wear one of those.  They’re way better than what they have the Ariel ride workers at Disneyland wearing…

I know, right?  AHHH, they’re TEAL!!!  Whoever did this at Disneyland wasn’t allowed to do it at Walt Disney World on the same ride.  And a big section of Fantasyland cast members say, “Whew!”

That said, the Germany costumes make everything look good in comparison…

Kudos to Derrick, our music pastor, for letting me use this picture… without knowing that I was using this picture.  I’m sure he would be all for it if he knew it was for a Disney post!

That said, the Germany costumes look a little like this… except with short pants and Pinocchio hats.  Oh, mercy.  All those poor young men who were envisioning a year at Disney working Space Mountain or serving up food at a posh restaurant at a five star resort while they were packing their bags for the World… only to arrive, get their Pinocchio costume, and be told they’re pushing trash bins all over the World Showcase.

I’d be crying for Deutschland if it were me, y’all.

After we had seen it all, we headed back to Morocco, where we were scheduled to have dinner at Marrakesh.  Wes ate about two tons of food (seriously), I ate another ton (yes, I did), and the girls?  Enjoyed chicken nuggets and hamburgers.  Thank you, Disney, for always keeping a kids’ menu!

The girls finished out the meal with a little belly-dancing.  Ana was really into it!  And after that many days on the Disney dining plan?  She actually HAD a belly.  (As we all did.) 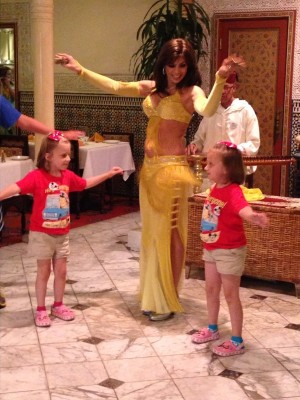 We finished up our full day at Epcot with a ride on Spaceship Earth and then headed back to the hotel for some swimming, where Emma made friends with every kid who got in the water.  Love that social girl… even if her chattiness, by this point, was making Ana want to strangle her.

The tension between the Faulkettes could only get better once we got home, and there were no other children to distract Emma, right?

We still had one more day of magic before we had to face that, though…