(Here’s a little Thanksgiving blog from 2009.  Hope you enjoy this look back as much as I did…) 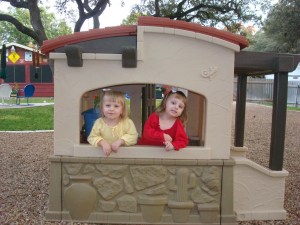 Can you believe that it’s already the last day of November? And can you believe that the girls have grown so much here lately that they are now as tall as a house, as evidenced by the picture above? (Okay, so that’s Coach and Nana’s playhouse, which is probably only five feet tall. And they’re still not anywhere near as tall as it is. But still!)

We had a whirlwind week last week. (Let’s see how many more times I can write “week.”) Ana and Emma started the week (ah-ha!) off right by doing hospital visitation with Wes. I went along and can’t tell you how amazed I was at how our girls just marched right in and hugged our church members without being fearful of the machines, the unfamiliar hospital staff, how weak some of our folks were, etc. They practically ran into the rehab area where a heart patient was waiting for physical therapy and grabbed him just like he was sitting in a pew at church, expecting that he had Tootsie Rolls for them in his pockets like he always does. (Now that I think about it, two tumbling tots might not have been the best medicine for a recovering bypass patient. Hmm.) It was a fun day for them, visiting alongside Papi Wes, and I sure did love watching them greet literally everyone we saw, familiar folks and strangers alike.

We packed the car and headed down to Texas on Tuesday night, where we met up with my family in Denton for dinner. My parents live south of Fort Worth, but my sister and her family live in north Dallas, so with us coming in from southwest Oklahoma, this was as central as we could get. I didn’t figure in rush hour traffic or dinnertime crowds when I cooked this all up (oops), so we all ended up staying out until about 9:30. Connor slept through it all despite my best attempts to kiss him awake, but Kendall, Ana, and Emma were practically climbing the walls together. It was good to get to see everyone.

After a night at my parents’ house, we drove down to San Antonio on Wednesday. We’ve perfected the art of car dining but had to tweak our skills a little to include a food-seeking dachshund missile, who was intent on eating my chicken sandwich, the girls’ fries, etc. We ate in shifts, which solved the problem because BC would sit with the person who wasn’t eating, then we switched her to another person, and so on and so forth. Is it boring that I’m writing about this? It’s far more interesting than writing about how bad her breath stunk and how at one point we thought there was a truckload of raw fish in our proximity because her mouth was positioned just so in front of the air conditioner. (Yes, it was just that bad.)

Anywho, we did eventually arrive in San Antonio. After getting the girls settled in with Coach and Nana (Wes’s parents), Wes and I left for my birthday date. I don’t know which part Wes enjoyed most of all — watching New Moon or getting to shop for shoes with me. (My parents had given me some birthday money, and since I’ve been freezing my legs off on Sunday with my mid-calf boots, I thought it would be wise to invest in some knee-high boots. Fortunately, the area of town we were in had one of my favorite stores, and with Wes’s enthusiastic help, I was able to find a good, quality pair of cute boots that mercifully spared my legs from the cold Oklahoma wind yesterday. Thanks, Mom and Dad!) In all seriousness, Wes was a great sport about the whole evening. There were a few moments during the movie that I had to pretend I didn’t know him because he was laughing so loud, but really, that was to be expected. Besides, I know that he’s secretly counting down the days until the next one is released.

We had a great Thanksgiving where we exchanged Christmas gifts with Wes’s extended family. Christmas at Thanksgiving — got that? Great. All three girls got Minnie Mouse purses and spent the whole evening applying plastic lipstick to their cheeks and talking on their cell phones to one another. Ana kept giving Hannah kisses and hugs and was VERY interested in five month old Adam, constantly watching him jump in his jumparoo. Em was more interested in Lucy the lab, however, and ended up using her as a pillow at one point in the evening. To each her own, I guess.

I browsed the Black Friday ads late that night and just happened (of course) to find something that struck my fancy. I wasn’t sure if it would be worth getting up at 4:30 so as to be there when the doors opened at Macy’s, but I convinced Wes that we needed to do it anyway. We ran by the Disney store at about 4:50 (yes, I know), did some shopping for the girls, and arrived at Macy’s at 5:02am to find a line all the way around the jewelry counter. The particular ring I had my eye on was a doorbuster item (and even more beautiful in person!), priced so low that they only had ONE that they were selling. I imagine the price was mainly to get people in the store to see everything else, and that they were willing to sell that one ring at cost to whatever crazy woman elbowed her way to the front of the line first. And I, dear friends, just happened to be that crazy woman! (I really didn’t have to elbow anyone out of the way. But I sure did hustle out of the store with my purchase, afraid that I’d be chased down by someone who was in line behind me who had gotten up early for that ring.) Kudos to Wes for braving the crowds for bling! And for buying said bling. Mwah!

We went on from Macy’s to Target, which was super crazy, then onto Toys R Us, which was mild enough that we were able to finish up shopping for the girls without feeling like we were in a combat zone. There was a woman in line with us who was disgruntled that they were sold-out of some of the gifts she had intended to buy. She told me, when I pointed out that the sale had begun at midnight, “Really, what kind of insane person would come up here at midnight to shop?!” I refrained from pointing out that it was 6am, which was just as crazy, if not more so given the fact that we got up that early for a sale that was already picked over. Crazy is relative, isn’t it?

After another night with relatives, we packed up the car and headed home on Saturday. We tried to plan a route to avoid holiday traffic, but our eight hour trip still ended up being closer to ten hours when all was said and done. When we finally crossed into Oklahoma, Ana moaned, “I just wanna go to my house.” We ALL felt that way!

And that was Thanksgiving week. Sorry for all of the random details, but this will help me the next time we plan a trip down there. I can look back at this post and remind myself to brush the dog’s teeth before we leave, to pack my comfortable sweats for 4:30am shopping, and to bring those Minnie Mouse purses for the car. Important things to remember!

I’m working on getting our lives back in order today — laundry, housecleaning, etc. Ana is already back to her normal schedule, but it’s taking Emma a little longer, as evidenced by Ana’s statement this morning that Emma, upon being woken up, told her, “Leave Emmy alone, Anabear!” Actually, the more that I think about it, that might be normal for Emma.

Hope your week is off to a great start!