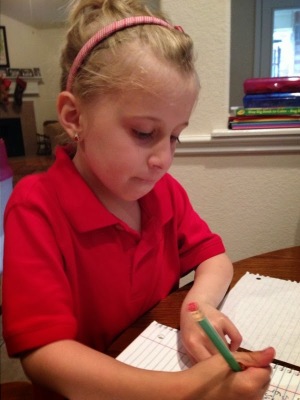 As many of you may remember, earlier this year we were told that Emma was showing some signs of having both ADD and dyslexia.  Because Wes has both as well, we took her teachers very seriously and signed consent for her school to start testing her.  I was pretty certain we were going to hear that she was showing consistent signs for both and that we had a long, long road ahead of us.  We started working with her using some new techniques and methods, anticipating the results of the tests before they came back.

Last week, we met with the school to discuss what they had assessed.

While the school can’t officially diagnose ADD, they can tell you that — yes — your child is indeed a scatterbrained, holler monkey who can’t sit still in class which means she MIGHT have ADD.  And after spending time with Emma both in the classroom and out of the classroom, both diagnosticians agreed that she does have some ADD tendencies.  I was most struck by the statement one of them wrote in her report, detailing how Emma’s bottom never really hit her seat in class.  She stayed put, but she was either standing at, dancing around, or kneeling in her chair while class was going on.  Not a behavior problem, they insisted, but as I said (and they agreed), “That’s still a problem.”  A problem we’ve observed here at home and have made some concessions for, allowing her some breaks during homework, interspersed with physical activity while her non-ADD sister watches her run laps around the living room like she’s a mad genius.  (Which she so TOTALLY is.)

ADD on a child who isn’t a behavior problem is something we can figure out.  I was more concerned about the dyslexia, knowing what it looks like for Wes and what it must have taken for him to get through years of a school system not designed or especially accommodating for that specific learning disability.  Not that it can’t be done — Wes is proof that it can.  But we didn’t want Emma to have to try as hard as he still does, even now.

The diagnosticians affirmed what we were seeing — the high frequency of flipped numbers and letters, words written backwards, and poor handwriting.  Because Ana has been our “baseline,” we haven’t always been able to determine what’s normal and what isn’t.  The diagnostician agreed that Emma has a lot of these tendencies but told us that while they were doing tests, she self-corrected most of her flipped letters without any prompting at all.  In addition to that, Emma’s reading skills are far enough above average that dyslexia doesn’t seem to be a possibility at all.

WOO-HOO!  (And I say that as someone who loves, admires, and believes that her dyslexic husband is one of the most brilliant men in the world.)

All that said, she is likely ADD but not dyslexic.  Her intelligence tests indicate that she’s every bit as bright as Ana (and possibly brighter in some areas), but her classroom performance is suffering, likely because she can’t focus long enough to do anything.  The diagnosticians said it was a credit to her intelligence that she’s not behind in class, even with how often her mind is just literally all over the place.  Along with her busy, busy little body.

We’re going to figure out how to help her achieve what we now know is possible for her to achieve.  I’m so thankful for all the testing and all of the many people who have helped her thus far and for all who are going to help us on the road ahead.  Thank you for praying for us and lending your expertise in these areas.