Last week, Wes surprised me with a getaway to celebrate our nine year anniversary. 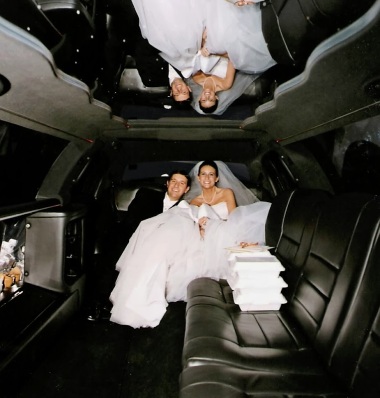 Aww… look at how cute we were!  (And this picture was actually from the wedding and not from our getaway.  Although it would have been the most amazing getaway ever if Wes had let me wear my wedding dress again!)

Luckily, before we even left the next morning, Emma was feeling much, much better.  She was in great spirits and great health, leaving me to chalk the episode up to nothing and freeing me to leave with no worries for a sweet few days away with Wes.  Whew, I thought to myself, so glad it was nothing contagious or anything!

(You already know where this is going, don’t you?)

So, we left for our getaway.  And we had a great day enjoying the sights and walking around together, even though I had a little bit of a headache.  I kept it to myself, though, not wanting to ruin any part of our time together.  By the time the sun went down and Wes told me our plans for dinner at a super romantic, super nice steak restaurant with incredible views and some surprises he had cooked up for me with the restaurant beforehand… well, my head was killing me.  I took something, thinking it would be done soon.  An hour later, en route to the restaurant, I told Wes I wasn’t feeling right.  He asked the same question he asks every time I feel sick, have a headache, or even just sneeze funny, “Are we pregnant?”  And I gave him the same response I give every time, “NO.”

(By the way, there’s never a “we” in pregnancy past the conception, despite Wes’s past ability to gain as much weight as I did with each of my pregnancies.  I appreciate the solidarity and all, but hearing him say, “I feel your pain” from morning sickness to labor only made me want to rip his arms off his body and beat him with them.  Repeatedly.)

Okay.  Sorry for that.  Back to the romance!

We were walking towards the restaurant, which was indeed beautiful.  We were admiring the view, which was indeed spectacular.  We were discussing just how much steak Wes intended to eat, which was… nauseating, actually.  Before I could even express to him how the constant talk of meat was (again) making me want to rip his arms off his body and beat him with them (repeatedly), I leaned over the picturesque lake next to the restaurant and threw up.

(I know. There sure is a lot of barf in this blog.  What can I say?  I live with elementary aged children who delight in kissing me and rubbing their faces all over mine when they’re sick.  That just spells barf for a lot of people, y’all.)

I’m proud to tell you that this is the first time Wes has ever witnessed me getting sick like this.  Nine years of marriage, and I’ve managed to keep him from this.  He was, as a result, properly alarmed and dismayed as I blessed that lake, especially when I finished, stood up, wiped my mouth, and said, “Let’s go get you your steak dinner.”  He kept protesting this, but I kept waving him away, insisting that I was fine… until we got inside, where I threw up again.  (This time in the bathroom.  MUCH better than the picturesque lake.)

He insisted when I returned that steak no longer sounded appetizing to him (and how) and convinced me to go back to the hotel room.  I felt bad enough that I agreed, nodding off on his shoulder on the drive back, then falling asleep just as soon as my head hit the pillow, never even noticing when he joined me in bed.

The next morning, I woke up feeling cautiously optimistic that the worst was over.  We took a slow morning then decided that some fresh air and a good, long walk might make me feel even better.  Three miles of walking and talking later, I concluded that Emma’s stomach bug was gone… but that it had probably ruined our anniversary getaway.  A puking wife, surprises voided, a missed steak dinner — these are bummers, you know.

But Wes smiled over at me as we were walking and said, with complete sincerity in his voice, “This has been a great anniversary.”  I raised my eyebrows at him, suspecting sarcasm, when he reached over, grabbed my hand, and said, “Just being with you, no matter what… so great.”

And with that?  He has proven, yet again, that I got way better than I ever could have deserved nine years ago when he said, “I do.”

So, so thankful for you, Wes.  Happy anniversary!