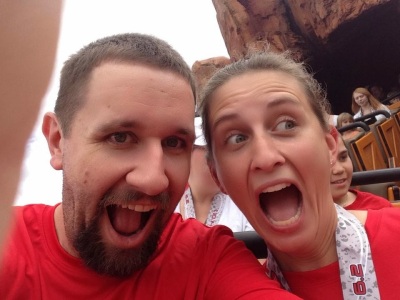 – From two gentlemen in the park wearing matching, monogrammed shirts and pushing strollers full o’ junk, an obvious giveaway that they were part of a family trip led by an A type go-getter, “She’s got EVERYTHING on the schedule.  Wake up times, ride times, show times, meal times — everything is on a schedule!”  The other guy responded with, “I know!  And no flexibility!  What are we supposed to do if we need to take an unscheduled restroom break?!  Pee on ourselves?!”  This was only funny because the woman they were complaining about overheard them and gave them such a talking to that I imagine they DID pee on themselves, thanks to the terror she inspired in them.  Just shut up and follow the lady with the itinerary, and NO ONE gets hurt!

– From a frustrated mother on the resort bus, “We’ve been here for three days, and my daughter is STILL asking us when we’re going to Walt Disney World, ALLLL because we haven’t been to the Magic Kingdom and seen the castle!”  I’d be confused, too, honestly.  You have to start with the Magic Kingdom if you’ve been promising a castle, Mommy!

– From a stressed out mother at Hollywood Studios, when loud music started playing from the front of the park, “Something’s going on over there!  Hurry up!”  Her tired child responded with, “What is it?”  The mother to her child, through gritted teeth, “I DON’T KNOW!  HURRY UP!!!”  Only funny because I’ve been that crazy mother before.

– From a loud, obnoxious runner on the Marathon Expo bus, to anyone who would listen to him, “Yeah, well, I had IT band issues last season.  Then some tendonitis and plantar fasciitis.  But I still qualified for Boston.”  Me to Wes, in a whisper, “Yeah, all I’ve had are lazy butt issues… in that I’m a lazy butt who finds it difficult to wake up and run most mornings.”  Wes to me, “What’s an IT band?”  I’d like to think it’s a rock group full of computer support guys.

– One teenage girl to another teenage girl as we sat in front of them on Pirates of the Caribbean, “Seriously, like, how much would I have to pay you to swim in this water?”  The going rate was $500, and Wes would have paid it in a heartbeat just to get them to shut up as they spent the entire ride talking about what they thought might be lurking in the murky depths.