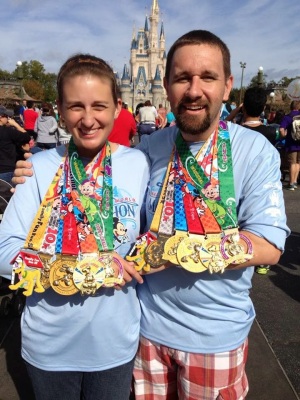 I know, I know… I didn’t ever give you an update about this, did I?

You may remember me writing about the Dopey Challenge — a four day race series that would have us running a 5K, a 10K, a half marathon, and a full marathon.  I thought it was a dumb idea when I heard about it, but because Wes was enthusiastic about it, we went ahead and signed up for it.

Cue the weeks of long runs back-to-back, training for this.  It wasn’t much fun, honestly, but we kept with it, knowing that the payoff was coming.

And it did.  We breezed through the 5K, the 10K, and the half marathon.  Any dread I felt coming into the full marathon (which was, believe it or not, our SIXTH marathon — who knew we’d do this more than once?!) was abated once we started and realized that all that training had prepared us.  At mile twenty-three, I was completely aghast because we were still running and we were PASSING people.  They were really slow people, just like we’re really slow people, but still!  Who knew it was possible to still feel so good that far into a marathon?  Not me!

That said, I will probably never do this again… at least not until I’ve run a few more “just marathons.”  I told Wes that with as good as we felt on day four of running we should be in a position to actually enjoy and excel with running just a marathon.

Our next opportunity to test that theory is THIS Saturday, when we’ll be running our seventh marathon…