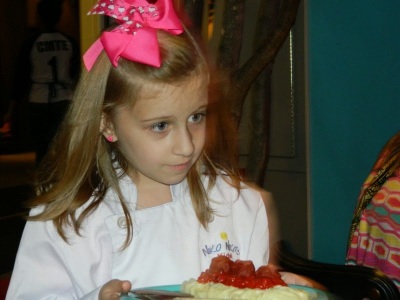 Last year around this time, Ana committed her whole life to Jesus and made the decision to live for Him.  We talked with her about what was going on in her heart for months leading up to that decision.  We spent time asking her questions, listening to what she was feeling, and helping her sort it all out.  She was ready, and while her decision wasn’t the advent of God’s work in her life, her profession and baptism was the evidence of what He’d already done in her heart.

Emma watched it all happen.  And while she heard the talks and listened to Ana’s responses, she still got it in her head that baptism was the key and that baptism naturally occurs at the age of six.

“I need to get baptized,” she told me recently.

“Because I need to get baptized,” she repeated, like I didn’t get it.

Well, someone wasn’t getting something…

“I think we should talk to Papi about this,” I said, wanting Wes to be in on this conversation.

And so we did.  Wes and I asked the same questions we asked Ana last year, and we got very different answers.  The most frequent answer we got was, “I don’t understand the question.”  We weren’t asking her seminary-level questions.  We were asking very basic questions about sin, about her own sin, about her need to be saved, and they were all way over her head.

“If you still feel like this tomorrow,” Wes told her, “come and talk to me again.”  We had said the same thing to Ana last year, and she came to us every day, saying again and again, “I really need Jesus in my life.”  So much so that the child had trouble sleeping at night!

But with Emma?  Nothing.

I’ve been a little down about this.  While I was so hesitant when it was Ana, because I couldn’t fathom a six year old really getting it, the proof of His work in her life has made me a believer (no pun intended), and I’ve been anticipating the same work in Emma.  As a result, I was ready to jump on the first mention she made of baptism, as if to say, “AHA!  She GETS it!”

When honestly?  She didn’t get it.

It’s not that I think her praying a prayer or getting dunked is going to make any difference.  The difference was already made on the cross, and God’s work in her heart started long, long before now.  If and when Emma comes to faith and gives her life to Christ, it will be the end result of all that God’s doing already, starting with these conversations she’s having even now with us.

When your seven year old regularly exegetes the Scripture in her spare time (she’s just like her Papi, y’all), it’s sometimes difficult to remember that for a six year old, simply saying that she loves Jesus and having her know that He loves her IS God’s work in her life.  And when she can’t connect all the dots and doesn’t feel a conviction for sins she’s not even aware that she has, it doesn’t mean that God is silent.  It just means that He’s working it all out differently in her.

I’m reminded that when I pray for her, after seeing God’s “yes” in Ana’s life so clearly, that Emma continuing on without any apparent move forward isn’t a “no.”