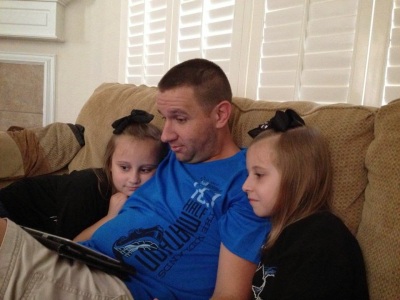 As is the case most days, the girls’ backpacks exploded approximately five seconds after they entered the house on Monday afternoon.

We worked on homework, sorted through papers, and just barely had the chaos restrained by the time Wes got home from work two hours later.  He volunteered to help get it all ready for the next morning by checking to make sure the homework was done, sorting out which books belong to which girl, signing notes, pulling out old papers, packing it all back up, and putting the backpacks right by the door so they’re easy to grab on the way out.

Halfway through my (lengthy) explanations and (confusing) descriptions, he had a rather glazed over look in his eyes.  Was keeping up with the load of second and first grade simultaneously too much for the man?  I think it was, as he had Ana packed up with Emma’s stuff and vice versa and was contentedly oblivious to what he’d done.  (He would have paid for that in the morning when a screeching Ana would have found Emma’s junk in her backpack.)

“Wes,” I said, “I know this all seems silly and pointless.  But you may need to know these things if I die and you’re left to figure out how to keep this place running.”

He watched me for a second, then said, “Well, I know how to fix that problem.”

“How’s that?,” I asked, expecting some grand answer about how he can run things just fine without anyone here at home and how he’ll figure out anything that comes his way.

He pointed at me, ready to deliver the grand plan, then said, very simply…

Then, he grinned.  “See, I’ve already figured it out!”

And with a self-congratulatory nod, he went about his business.

Clearly, if he’s able to problem solve like that, he’ll be just fine.

Whew!  I feel so relieved!

One thought on “Just Fine”