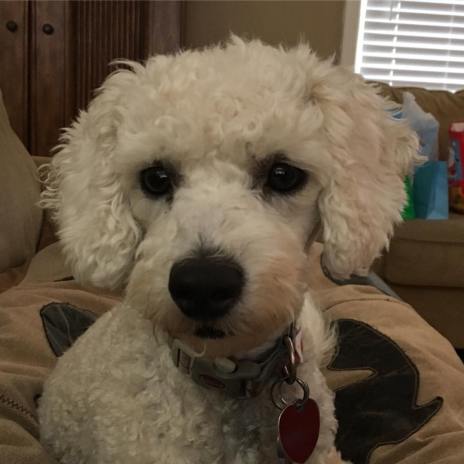 We’ve got a flea problem at the Faulk house.

I’ve tried everything that’s been suggested to me. Flea collars, spraying the yard, the greasy awful stuff you put on the dog’s back — all to no avail. I even asked the vet about getting on one of those expensive pills, but she said it wouldn’t work because the fleas this year are just that bad for dogs like Evie, who are like furry, flea-attracting Muppets.

That said, I finally figured out something that would work. Little known fact about me. Back in the day, I was like the Lice Ninja. That’s right, the Faulkettes got head lice a few years ago and kept trading it back and forth and back and forth, swapping this strange new strain of foul demon bugs that were IMMUNE to the lice shampoo. They were immortal… until I worked the girls’ hair up with so much cheap conditioner that they (the bugs, not the girls) were so stunned and immobile that I could pick them out one by one, then comb out all the ones too small to see, along with their eggs. Doing this repeatedly every day for a couple of weeks was the only way to defeat those lice, but I did it! Take that, lice!

I remembered all of this as I watched Evie scratch and scratch and scratch. How different are fleas than lice? And how different is a wiggly dog who hates baths than wiggly children who hate baths? They’re practically one in the same. So, I soaped that dog up like she was a child of my womb, and once the fleas were stunned (and in some cases, dead – thank You, Jesus), I picked them out one by one. Bit by bit, which was no small feat since she was squirming like I was killing her, even as I tried to calm her down by singing comforting tunes, a la the best of Elvis gospel. (Evie didn’t care that there was going to be peace in the valley, just so you know.) Even with the struggle, I got it done, and after all of that exhausting work, the dog was flea free. Woo-hoo!

Yeah, not so much. She turns her nose up at me and goes and sits with Wes, who doesn’t do anything but scratch her belly. (Which is now flea-free, thanks to me.)

What in the world, right? How unfair is all of this? Why would she despise the good done to her, just because it wasn’t pleasant? It’s a mystery, really.

Except not. You start thinking a lot of crazy things as you’re picking fleas off a dog who is doing her best to make it as difficult as possible. And the one thought that kept returning to me through all of this (and then in light of her attitude afterwards) was this — how often do I resist God’s refining work in my life, just like this dog is resisting me? My sin issues and my hangups and my wrong attitudes are just as bad as fleas — little things that add up to a big problem if left to just continue on as they are. And God in His wisdom sees that more clearly than I do, and so He graces me with refining work, which often times feels like discipline and heartbreak and conflict that I naturally want to fight. Not today, Lord; I’m just fine with my issues. Like a dog with fleas, feigning contentment because I don’t want to be clean. And then when God does what I don’t want Him to do, I don’t rejoice. In fact, I do everything I can start to feel a little irritated, like Evie does. How dare He, right? I think He hurt my feelings. How could a loving God make me endure these things?

God sees the bigger picture. God knows that the sin has to go. And taking it from me can be a painful and tedious project, but He does it anyway, because that’s who He is. It’s for my good, even if the steps involved don’t feel good at all.