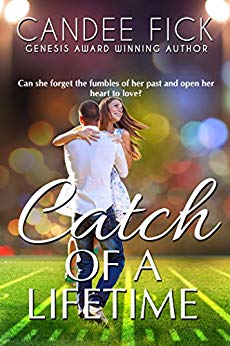 Okay, y’all, this week’s read could fit under the category of “free books galore and my aging memory.” I saw an ad on Facebook a few weeks ago for one of Candee Fick’s books. You know the ads – they show you a picture, give you a blurb that grabs your attention, and pop a link right up on your timeline. Those ads must be expertly marketed to fortysomething Christian romance readers in rural Louisiana (we’re a legit demographic) because I click on each and every one of them. And her ad had me going on over to Amazon where I saw that her books are Kindle Unlimited (yes!) then clicked on this particular book, only to have Amazon tell me, “You’ve already purchased this book, you idiot.”

Yes, I’d apparently already downloaded the book when it was free because sure enough, a search for Candee Fick on my Kindle pulled it up where it had been hidden for who knows how long. (“Since August 14, 2017, you idiot,” Amazon tells me oh so helpfully as I pull it up now to double check that information. Thank you, Amazon.) Anyway, all this matters very little to you probably, but it makes me wonder how effective free books are in terms of marketing yourself as a writer when it comes to readers like me who accumulate so many books and keep a Kindle Unlimited book subscription. Not that I’m going to stop offering free books (because that always boosts sales and pages read), but it sure does make me wonder how I can grab a reader’s attention strongly enough with that free book that she moves it to the top of her to-read book. Or, like Candee Fick did, how I can keep my name out there, reminding readers that “hey, you already own one of my books, you idiot. Maybe you should finally read it.”

Makes me think, you know.

All that said, I finally read Catch of a Lifetime by Candee Fick recently, and I really enjoyed it! I’d never read anything by her before, but this won’t be my last book as she has quite a few on Kindle Unlimited. This one was a great example of the formula that I most enjoy reading in contemporary Christian romance – boy meets girl, both have their own baggage, they each come to grips with their past through God’s grace while also falling in love with each other, and then, boom, happily ever after. I felt like the happily ever after came earlier than is normally expected in this one, so much so that I began to think that there wasn’t much conflict at all in the story. Everything was happy. And then, out of nowhere, there was a big dramatic moment that created conflict and brought a resolution all at the same time. It was huge! I think a warning of some sort probably would have been a helpful thing for more sensitive readers. I’m not all that sensitive about reading most things, but even I was a little taken aback by the realistic way the author wrote this particular part of the story. I feel like I’m being super vague, but I don’t want to spoil any of the story for you!

If you see this book and are iffy about it because you (like me) don’t know anything about football (I was in the marching band, after all), don’t let that keep you from it. There’s a lot of football talk and some scenes at some games where I admittedly got lost for a few minutes, but these moments didn’t constitute the majority of the book. I was glad those excerpts were in there, actually, as it made the pressures that Reed faced in his career all that more realistic. I also appreciated how Cassie came to terms with her hurts and how the Lord worked in her heart, moving her beyond her bitterness and unforgiveness. Too often, I think we take the easy way out with our hurts by saying “I’ll just move on for my own good,” but the author of this book took special care to show how Cassie really forgave the one who had hurt her, making the point and the effort to see that other person as someone who had made a mistake, just as she herself could have made. (Vague much? I just don’t want to ruin anything!)

Definitely check out Catch of a Lifetime by Candee Fick if you’re looking for a good, clean romance that honors Christ! (And like I mentioned before, it’s on Kindle Unlimited. Woo-hoo!)