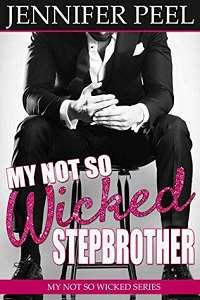 This week’s Wednesday Reads is so much fun! If you haven’t read anything by Jennifer Peel, you need to go over to Amazon right now and download some of her books, which are the best out there in the clean romance department. (And they’re all on Kindle Unlimited!)

My Not So Wicked Stepbrother is her newest book, and I think it’s her best one yet. As you can probably gather from the title, the action centers around Emma who has more than a little crush on her stepbrother, Sawyer. They only became step-siblings as adults and actually knew one another before their parents married, so there’s no weird factor to her feelings for him. In fact, if you’re like me, you’ll find yourself wondering why they don’t just get together already, right from the very beginning of the story! But then, the conflicts start rolling in, along with some great secondary characters (I love Shelby!) and some really funny moments. I always appreciate the unique and truly original details that Peel brings to her characters, making them very relatable and true to life. Emma had a job as a metallurgist (which, I think, means that she does fancy math and computer work in a steel factory but still manages to get herself dirty when things go wrong), an involved and complicated relationship with Betty Crocker and the Pillsbury Doughboy (or Poppin’ Fresh, as she clarifies), and a slight obsession with Dr. Pepper (which is totally understandable as she manages to find herself the ones in the green cans, which are as close as you can get to Dublin Dr. Peppers, the greatest of ALL Dr. Pepper). The pacing of the story was perfect, with some really difficult moments thrown in towards the end, making you wonder how it was all going to work out. And I won’t spoil the ending… but it was good! You’ll be left with warm fuzzies.

Just as a warning, this book isn’t faith-based fiction. While it’s completely clean (no sex scenes or questionable language or any of that), it’s edgier than most books read by Christian fiction readers. If you read my books and aren’t offended, you’ll probably be just fine reading this and will probably laugh at the edgier parts. Like Shelby heading down the river in that bikini and all of Emma’s thoughts on what could go wrong – hilarious! But that would probably induce some to start clutching their pearls.

All that said, you can grab the book here, along with lots of other hilarious and sweet books by Jennifer Peel. (And did I mention that they’re on Kindle Unlimited?!)